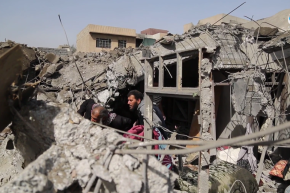 U.S. military airstrikes have pummeled Mosul, and in graphic footage, ISIS claims to show civilians among those killed

The propaganda wing of the Islamic State has released a video purporting to show U.S.-led coalition air strikes on residential areas in the city of Mosul, and the toll those strikes have had on the civilian population.

The video, which cannot be independently verified, claims 1,800 civilians have been killed in the northern Iraqi city since the U.S.-led military campaign to wrest it back from the terror group began last October.

The Amaq News Agency video featured images of children being pulled out from under rubble, some dead, some badly wounded, and evacuated to nearby hospitals.

“An innocent family of 45 people, and only two survived this bombing by the Crusaders, Jews and Saudis,” one man said to the camera, standing beside a body. “May God slaughter you all.”

The numbers of the dead have been confirmed to number at least in the hundreds. The Airwars monitoring group, an independent initiative that attempts to record all reported airstrikes, claims that at least 250 people, and as many 370 were killed in western Mosul in the first week of March during fierce fighting to capture the city.

The United Nations mission in Iraq has announced earlier this year that at least 392 civilians were killed across Iraq in acts of terrorism, violence and armed conflict, compared to 403 people in January. The UN also reported that since 17 October, over 330,000 people have been displaced by the Mosul crisis. Some 70,000 have apparently returned to their homes.

The U.S. military has repeatedly claimed that its forces make every effort to avoid civilian casualties. Reuters reported just last week the claim by prominent Iraqi politician Khamis Khanjar that at least 3,500 civilians have been killed in west Mosul since fighting focused in that area. The U.S.-led coalition on the other hand, claimed to have unintentionally killed some 220 civilians since October last year.