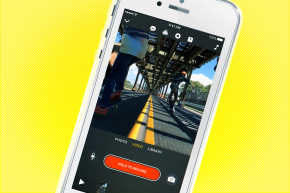 Video seems to be the next big thing in social media, and Apple does not want to miss the trend, so it’s releasing its own video app.

Clips, one of Apple’s latest products, is an app that allows users to shoot and edit social videos similar to those on Snapchat, Instagram, and Facebook, then share then on any and all social networks.

The app lets anyone create expressive videos for the iPhone and iPad by combining video clips, photos, and music. Users can then overlay filters, titles, and stickers to finalize the video and share it on all popular social networks.

Apple claims the app’s “breakthrough feature” is that it lets users create animated captions by using just their voice. So you can say a quote and the app will write it out for you. However, it’s still unclear how precise the audio recognition will be. If it uses Siri, then we know it won’t be that great — especially in areas without any reception.

“Clips gives iPhone and iPad users a new way to express themselves through video, and it’s incredibly easy to use,” Susan Prescott, Apple’s vice president of Apps Product Marketing, said in a press release.

All this might sound very familiar, and that’s because it is. Every feature in Clips has been borrowed from successful social media apps including the filters from Snapchat, the clip editing from Instagram, and the emoji and text overlays from every other app in the market.

The one likely unique feature that Clips does introduce is the predictive contact suggestion. If you were to add the name of a friend or family member in the captions, then Clips will suggest sending the video or photo to that contact vie Messages.

Regardless of Clips being a copycat of all major social networks, it’ll still have its moment of popularity with iPhone owners. There’s no doubt that people will start flooding their Facebook and Instagram feeds with these hyper edited clips.

It’ll be interesting to see how successful Apple is in developing a social media app without offering the entire social network aspect. It’s just a tool, rather than a platform. Clips will be available for free on the App Store beginning in April. There is still no word if an Android version will be developed at a later date, but given Apple’s history with app development, it seems highly unlikely.