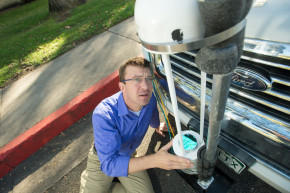 In several cities, a laser detector mounted to cars were used to spot methane leaks, a potent greenhouse gas

In the nearly 10 years they’ve been patrolling the streets of the world, Google Street View cars have captured some true gems of nature and humanity. Now researchers from Colorado State University are teaming up with the Google fleet to capture important data for the planet: leaks of methane gas.

Humans use methane, the main ingredient in natural gas, to do everything from power stoves, heat homes, and fuel vehicles. But methane is also a greenhouse gas, trapping 25 times more heat in the atmosphere than carbon dioxide. Methane leaks can persist for years undetected, contributing to global warming and creating explosive hazards.

A whole field of engineering has sprung up to try to detect and plug up these leaks before they can wreak havoc on humans and on the environment, leading to the development of things like pipe-trawling robots or sophisticated aerial detecting systems. But doing that in an urban setting, where gas pipes are close to the surface, sprawling, and dense, continues to be a challenge,

More Navy Hopes To Harness The Power Of Bacteria Farts

The researchers from Colorado State University created a methane detection system that can be attached to the Google Street View cars, according to a study published Wednesday in the journal Environmental Science and Technology. The detection system is based on an infrared laser analysis. The system shoots a laser at the air in front of it and uses infrared detection to pick up on the amount of methane present; processing algorithms help researchers identify the size of the leak in real time.

After testing the system in the lab, the researchers attached their system to three Google Street View cars and deployed them to Indianapolis, Burlington, Boston, Staten Island, and Syracuse. The drivers were told to make at least two passes along each road. The system was 76 percent accurate overall—factors such as how fast the car is going, if there’s wind that day, and the size of the leak were found to skew the results.

So though improvements are possible, the researchers say the Google cars are faster than the standard, manual method — making it faster to find more more leaks. This could ultimately have a big impact on emissions, because fixing the largest 8 percent of leaks would reduce methane emissions by 30 percent.

Ultimately, the researchers hope their work can help governments and utility companies can prioritize where to start replacing faulty or aging pipes. “We anticipate that this information on leakage rates can be used to prioritize efforts, both in ongoing repair programs and in pipeline replacements, where focus on the leakiest segments can reduce total emissions during the period it takes to replace all the leak-prone pipes,” the study authors write.