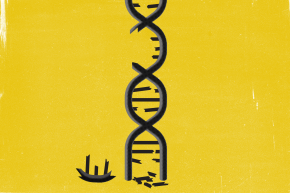 Why Does Cancer Happen? Often, It May Be Random Genetic Chance
By Alexandra Ossola

Why Does Cancer Happen? Often, It May Be Random Genetic Chance

Many cancers are spurred by fluke mutations, a major study finds, but it’s more complicated than just bad luck

The simplest internet search will tell you that most adult cancers develop from a combination of inherited genes and environmental or lifestyle factors (smoking, obesity, that sort of thing). Researchers from Johns Hopkins University have figured out a surprising, and critical, third factor: sheer chance. Random mutations could account for as many as two thirds of cancer-causing mutations, according to a study published Thursday in the journal Science.

“It is well-known that we must avoid environmental factors such as smoking to decrease our risk of getting cancer. But it is not as well-known that each time a normal cell divides and copies its DNA to produce two new cells, it makes multiple mistakes,” Cristian Tomasetti, an assistant professor of biostatistics at the Johns Hopkins Kimmel Cancer Center and one of the study authors, said in a press release. The new research, in fact, breaks this established paradigm of what causes cancer, Tomasetti added in a press conference Wednesday.

More Your Phone Can Now Be Used To Sequence DNA, Detect Cancer

Every time a stem cell divides, an estimated three mutations occur. Most of the time, these mutations are innocuous—they occur in DNA that doesn’t directly code for proteins, so it doesn’t do anything to alter how the body functions. But sometimes these can occur in important genes that could drive cancer. That fact, combined with the knowledge that the most common types of cancers occur in tissues where cells are frequently replaced, made the researchers suspect that there might be an additional cause of cancer, but it was not easy to measure. The researchers behind the current study had illuminated some of the role of random mutations in a 2015 study that surveyed cancer patient records from across the United States.

To get a better idea of whether their findings could be generalized more broadly, and to break down how big a role these random mutations might play in driving certain types of cancer, they needed a lot of data from all over the world. They looked at data on 32 different cancer types in individuals documented in 423 international cancer databases from 69 countries, representative of a large portion of the world’s population.

The international analysis revealed the same correlation they found in their previous study that was restricted to the US. There was a strong correlation between the lifetime risk of many types of cancers, such as those in the breast, prostate, kidney, and bone, and the number of stem cell divisions in those tissues. “It seems to make sense—the more divisions in stem cells, the more random mutations, the more cancer,” Tomasetti said in the press conference.

That doesn’t mean that all cancers arise due to sheer chance. Usually, you need three or more mutations to cause cancer, and the researchers found that inherited genes and especially environmental factors can increase the rate of random mutations, so that all three factors work in concert. They say that their findings are in agreement with previous estimates that about 40 percent of cancers are preventable. That’s important, because statisticians have shaken their heads when journalists interpreted the researchers’ previous study to mean that a large proportion of cancers are just “bad luck.”

Take, for example, 20 patients with a type of lung cancer called adenocarcinoma, which accounts for about 40 percent of the lung cancer diagnoses. In 90 percent of the patients, cancer developed as a combination of random and environmentally-caused mutations. All but that last 20 percent of cases are preventable, at least in theory, Tomasetti says, because eliminating even one of the environmental mutations would have meant that the cancer did not develop. That number looks different for other types of cancers—prostate cancer, brain cancer, or childhood cancers, for example, are largely driven by random mutations, the researchers state. And the researchers didn’t break it down by cancer subtypes that might vary in how big a role environmental, genetic, or random factors may play.

“We hope that this research offers comfort to the literally millions of patients who have developed cancer but who have led near-perfect lifestyles, who… [have] done everything we know that can be done to prevent cancer, but still get it,” said Bert Vogelstein, co-director of the Ludwig Center at the Johns Hopkins Kimmel Cancer Center and the other author of the study, at the press conference. That’s particularly important for parents children with cancer who feel guilty that they may have played some role in the development of the disease.

The researchers also hope that their findings can inspire scientists to find novel cancer treatments centered around limiting the damage that these mutations can cause. They expect that random mutations will make up an even larger proportion of causes of cancer as the population ages and more people eliminate harmful environmental factors. “We now know as a result of this research that most of the enemies [in the war on cancer] are inside us. They’re already here,” Vogelstein said at the press conference.

They suggest a few interventions that might make random mutations less frequent, such as special kinds of antioxidants, and suggest that new screening mechanisms could help, too. Right now, Vogelstein emphasizes, we don’t know enough about what causes the random mutations to suggest that people take preventative measures, and there are likely a certain percentage of random mutations that are simply unavoidable. But new approaches or interventions might represent a shift in how scientists look to treat cancer altogether.