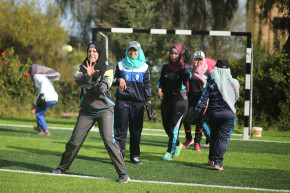 In headscarves and baseball hats, dozens of Palestinian women in Gaza are forging their own tradition in a classic American pastime — baseball.

“We have difficulties in Gaza, but the young people, especially the girls, are looking to develop themselves, develop Palestine, learn about things happening in the world,” said Mahmoud Tafesh, the coach of Gaza’s first-ever women’s baseball team.

In the blockaded enclave, Tafesh has faced multiple obstacles. Without funding, he’s foot the bill for the twice weekly training sessions in the southern Gazan town of Khan Younis. The team uses baseball bats whittled down from slabs of wood and tennis balls instead of baseballs.

Tafesh was able to find only one baseball mitt in all of the Gaza Strip, at the local Sports Ministry building. He took it to a tailor with a request for cloth replicas, using sponges for padding. Tafesh boasts that within only a short amount of time, the team is already adept at underhand pitching and catching.

Tafesh began recruiting team members last month at Gaza’s sole sports education college. To his surprise, more women signed up than men: 40 women and 20 men, including many university students who said they had their parents’ permission to play. At the training sessions on the women’s soccer field behind al-Quds University, Tafesh is always careful to avoid touching his team, who wear long-sleeved shirts and loose pants, to keep in line with social norms.

“Palestine is a conservative society, but it’s not backward,” said Tafesh and that there are ways to get around any gender issues. “When I hear that people think it’s not allowed for women to play sports, I respond by saying no, it’s completely okay,” he told Vocativ in an interview over the phone.

Tafesh played soccer with the Palestinian national team for 16 years and trained as a baseball coach in Egypt. He has big ambitions for the Gazan women’s baseball team, including ultimately launching a national team that could compete in the Asian baseball championships.

Since the Islamist Hamas movement took power since 2006, the Gaza Strip has been subject to a grinding, decade-long Israeli and Egyptian blockade that has heavily restricted travel and trade, including specialized sports equipment.

Unlike boys, who can play soccer outside, women are discouraged from publicly mingling with the opposite sex, and there have been efforts to curb the growing effort by women wanting to take part in sports.

Hamas barred women from running the Gaza marathon in 2013, which led to the event being cancelled. It has also insisted that women are forbidden from riding motorcycles with men. Women train for sports in secluded arenas or in either all-women or gender-segregated gyms that host men-only or women-only days.

When women bike around Gaza, passers-by hollered at them, saying they’re breaking an unwritten rule that bans women from cycling once they reach puberty. In conservative parts of the Muslim world, they warn that cycling might invite inappropriate leering at women’s legs and bottoms. Women are told that riding a bike could “ruin” a girl’s virginity, as well as her marriage prospects.

Tafesh’s team has also been the subject of criticism.

“Some said that as girls you should be careful not to go to hell. Others said that girls should stay at home,” Shaer said after a recent two-hour long training session.

A makeshift bat and a glove