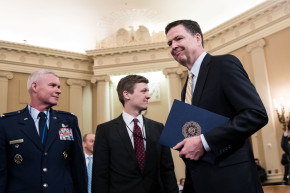 Comey confirmed the investigation at a dramatic House Intelligence Committee hearing, set to address the lengths to which Russian intelligence service meddled in the U.S. presidential election. A joint report between the FBI, the National Security Agency, and the Central Intelligence Agency previously agreed that Russia conducted an influence campaign to support Trump over rival Hillary Clinton.

In his opening remarks, before being asked any questions by members of the intelligence committee, Comey said he would take the unusual step of admitting an ongoing investigation into classified matters.

“Our practice is not to confirm the existence of ongoing investigations, especially those investigations that involve classified matters, but in unusual circumstances, when it is in the public interest, it may be appropriate to do so,” he said.

“I have been authorized by the Department of Justice to confirm that the FBI, as part of our counterintelligence mission, is investigating the Russian government’s efforts to interfere in the 2016 presidential election. And that includes investigations the nature of any links between individuals associated with the Trump campaign and the Russian government and whether there was any coordination between the campaign and Russia’s efforts.”

The extent, if any, to which Trump’s campaign actively coordinated with Russian government agents is unknown. But a number of Trump advisors and members of his campaign have had connections to the Russian government exposed, including former foreign policy advisor Carter Page, former campaign chairman Paul Manafort, and former national security advisor Michael Flynn.

In the spring of 2016, during the campaign, hackers broke into Democratic National Committee servers and stole huge batches of emails and other documents, which soon were released by a mysterious online character named Guccifer 2.0, who in turn announced plans to give those files to WikiLeaks, which soon released them following its usual policy of declining to name its source.

Several press outlets, including Vocativ, found aspects of Guccifer 2.0’s story didn’t add up and concluded it was a likely Russian government operation, a conclusion the U.S. Director of National Intelligence made in an October press release. Trump associate Roger Stone has reportedly also admitted to coordination of Guccifer 2.0, though he has claimed to have not understood the character was an extension of the Russian government.

Trump himself has repeatedly praised Russian president Vladimir Putin, a leader that oversees a country in which journalists, opposition politicians, and gay citizens are regularly murdered. At the same time, Trump has alienated leaders of traditional U.S. allies like Australia, Mexico, and Germany. In 2016, at the Trump campaign’s urging, the Republican National Committee made a surprise about-face on a major policy, softening its opposition to Russia’s presence in eastern Ukraine.

In his remarks, Comey stressed how little he is able to say, and cautioned against expecting the results of the investigation any time soon.

“As with any counterintelligence investigation, this will also include an assessment whether any crimes were committed,” he said. “Because it is an open, ongoing investigation, and is classified, I cannot say more about what we are doing and whose conduct we are examining.”

“This work is very complex and there is no way for me to give you a timetable as to when it will be done.”

Clapper and NSA head Michael Rogers did put to rest one theory of Russian interference, however. Agreeing with both individual U.S. states and voting experts around the country, they both agreed there’s no evidence Russia or any other agency fraudulently changed U.S. vote totals.