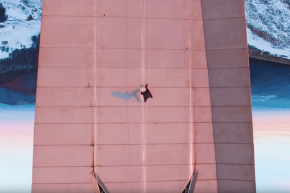 “Temple Run” has been an addicting, popular game on smartphones for quite some time now, but imagine if you were able to parkour your way through the real world collecting coins and dodging obstacles. Well, a group of Bulgarian freerunners did just that and captured the whole thing with a drone.

Mixed Motion Project, which consists of freerunners Ilko Iliev and Marin Kafedjiiski, just won “Best in Show” at the New York City Drone Film Festival this weekend with their film “2-D Run.” The film features Iliev running, jumping, and flipping through different properties for five minutes. At some points in the video, he is seen cycling, swimming, jet skiing and even vertically walking up a tower. There are also certain scenes that are resonant of classic video games including Super Mario Bros. Towards the end of the film, Iliev starts stumbling and slowing down and eventually collapses to show that it’s game over.

“He shoots, I jump and do stunts,” Iliev said in a Bulgarian interview for Asphalt.bg. “What we are trying to create does not have an ultimate goal or a deeper meaning. There are just projects and ideas we have the desire and the abilities to transform into reality. Every video is a different concept, that we liked enough to accomplish.”

Iliev said the entire video took 20 days to shoot and was hard to make because of the extreme cold. Although it took time, the film didn’t cost nothing to make thanks to Iliev’s connections and friends who already owned filming and editing equipment.

“The entire clip is created with a lot of desire, 0 gold and the support of wonderful friends,” Iliev said.

“2-D Run” was not the only parkour film that won at NYCDFF. There was also a film from the UK titled “Drone Parkour” that won under the Extreme Sports category. Other winners at the film festival include a documentary on the North Dakota Police, an eagle eye-view of Australia’s landscape and a drone baking a cake.