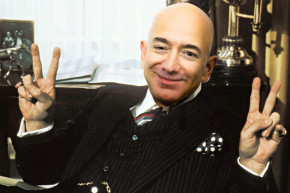 He's a billionaire, bald, and also controls a mech suit

If you think comic book characters aren’t real, then you haven’t been paying attention to many Silicon Valley billionaires lately. Amazon CEO Jeff Bezos — and rocket launching aficionado — posted a photo on Twitter this morning of him controlling a 13-foot-tall robot and wickedly smiling. While he looks happy and excited, it’s hard not to mistake him for Superman’s biggest villain, Lex Luthor.

I just got to pilot an awesome (and huge) robot thanks to Hankook Mirae Technology. Nice! #MARS2017 pic.twitter.com/MvN6ghEYFi

Bezos has been previously compared to Luthor, who is also a billionaire, businesses magnate, and philanthropist. Most importantly, he’s also bald and wears a mech suit eerily similar to one in Bezos’ tweet. The photo on his tweet was captioned with, “I just got to pilot an awesome (and huge) robot thanks to Hankook Mirae Technology. Nice!”

In another video he is heard asking, “Why do I feel so much like Sigourney Weaver?” making a reference to the actress’ scene in “Aliens” in which she wears an exo-suit. However, what he probably wanted to say was, “why do I feel so powerful and evil?! Kneel, peasants! (then lets out a maniacal laugh),” but that would’ve revealed his identity.

All jokes aside, Bezos was actually test driving the Method-2 Robot at Amazon’s annual MARS conference. The invite-only event is dedicated to machine learning, home automation, robotics, and space exploration.

The Method-2 was first revealed last December when videos of it functioning were going around the Internet. The suit was created by South Korean company named Hankook Mirae and looks very similar to something scene in an anime or Sci-Fi Hollywood movie — which makes sense given the fact one of the designers worked on “Transformers 4: Age of Extinction.”

It’s still unclear what Method-2’s purpose is on Earth, but so far we’ve seen it move its giant mechanical arms and take a couple of unimpressive steps. People thought it was a hoax back in December, but today’s videos and images prove it’s real.