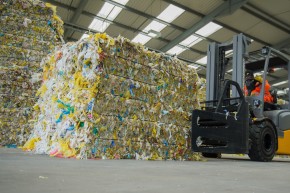 Tampons, Diapers Will Be Rescued From Trash And Turned To Energy
By Allee Manning

Tampons, Diapers Will Be Rescued From Trash And Turned To Energy

The new tech, being developed in UK, could heat buildings with used sanitary waste

One of the UK’s largest waste companies has begun a new project to turn tampons and diapers into fuel, according to the Guardian.

In Europe, turning waste into fuel is fairly common, but the dampness of used “absorbent hygiene products” have made it difficult for these everyday items to be put to use. As such, they’ve traditionally been incinerated or left in landfills. As PHS, the England/Wales-based group behind the diaper-to-fuel initiative called “LifeCycle,” notes, neither of these solutions are ideal. Diapers can take up to 500 years to decompose, and incinerating wet waste requires more energy and is thus more expensive.

Now, this particular kind of waste collected by PHS will be compacted, screened, separated, and dehydrated into “refuse derived fuel.” That fuel will be used to produce electricity and heat.

“Hygiene products are an essential part of many of our everyday lives but disposing of them has always been an issue,” said PHS Group CEO Justin Tydeman in a press release. “For the first time, we can all enjoy the benefits that the products bring and know that they are disposed of in an environmentally responsible way.”

It’s still unclear exactly how much usable energy will actually result from this process, as the Guardian notes experts are researching its environmental impact now.

According to a press release from PHS, this multi-million dollar project is the first of its kind. Though PHS would only be able to collect the refuse created by its clients, recent trials of public curbside sanitary waste product pickups conducted in Scotland help demonstrate the possibility of a future where all diapers and tampons may be put to a second use after their primary function is served.