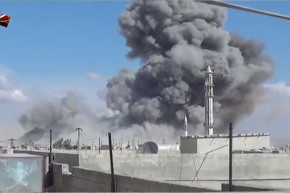 Al-Qaeda Calls On Members To ‘Kill Americans’
By Gilad Shiloach

Al-Qaeda is calling on its members to “kill Americans” in retaliation for an airstrike last week that allegedly destroyed a mosque.

The British-based Syrian Observatory for Human Rights said that 49 Syrians were killed in the Thursday night bombing, initially describing it as a “massacre.” The Pentagon confirms it carried out the strike, but denies it hit a mosque.

The terror group Al-Qaeda, which was the stated target of the bombing, released an official statement on the message app Telegram, titled “Kill the Americans without consulting anyone.” It blames “America and its damned president Trump” for the killing and wounding of “more than 300 worshipers” in a mosque in al-Jinah west of Aleppo, north Syria. (The terror group has a history of overstating casualties.)

The message, published in English, urges ‘Muslims in general and the youth of Islam in particular” to “kill Americans” on their own, without asking anyone. It quotes an old message by Osama bin Laden that “neither America, not those who live in America, will [even] dream of security until we see it on the ground in Palestine and before we expel all the infidel armies from the land of Muhammad.”

In its denial, the U.S. rejected claims of killing of civilians, and also released an aerial photograph it says shows a mosque in the area which is still standing across the street from a building that had been reduced to rubble by the strike. Navy Capt. Jeff Davis, a spokesman, claimed that dozens of core al-Qaeda leaders were killed in the raid conducted by manned and unmanned aircraft. “We struck a meeting of senior al-Qaeda terrorists, some of these were likely high-value individuals,” he said.

This isn’t the first time al-Qaeda has tried to capitalize on American airstrikes. Vocativ reported that the botched U.S. counter-terrorism raid in Yemen last month that brought President Donald Trump his first military death since taking office re-energized al-Qaeda. It called Trump a “fool” and called upon supporters to “burn the land underneath America’s feet.”

Al Qaeda’s branch in Syria, formerly known as Nusra Front, has made parts of the country’s northwest a terror safe haven. Six years into the Syrian civil war, it’s taken advantage of the chaos to build one of the most effective forces countering Syrian President Bashar al-Assad. It rebranded itself Jabhat Fateh al-Sham last summer and, and in January 2017, formed an alliance with other Islamist Syrian rebel groups. The new union is an attempt to unite Al-Qaeda and other Islamist groups against the US coalition.