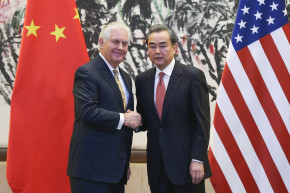 China Wants U.S. To Be ‘Cool-Headed’ When Dealing With N. Korea
By Ethan Harfenist

China Wants U.S. To Be ‘Cool-Headed’ When Dealing With N. Korea

Secretary of State Rex Tillerson met with Chinese Foreign Minister Wang Yi on Saturday after the U.S. warned of a possible military strike

After Washington warned that a preemptive military strike against North Korea was more or less “on the table,” China on Saturday urged the United States to be “cool-headed” over its nuclear tensions with the rogue nation.

Secretary of State Rex Tillerson, on his first trip to Asia as head of the State Department, arrived in Beijing on Saturday and met with Chinese Foreign Minister Wang Yi. Speaking to reporters after the meeting, Tillerson pledged to “make a course-correction” in North Korea with the help of China.

“I think we share a common view and a sense that tensions on the peninsula are quite high and that things have reached a rather dangerous level,” Tillerson said. “Foreign Minister Wang has agreed that we will work together to see if we cannot bring the government in Pyongyang to a place where they want to make a different course — make a course correction and move away from their development of their nuclear weapons.”

Afterwards, Yi advocated for a diplomatic approach to the issue in order to de-escalate tensions on the Korean peninsula.

“No matter what happens, we have to stay committed to diplomatic means as a way to seek peaceful settlement,” Yi told reporters. “We hope all parties, including our friends from the United States, could size up the situation in a cool-headed and comprehensive fashion and arrive at a wise decision.”

China’s conciliatory tone comes after Tillerson on Friday warned that the U.S. may take a more heavy-handed approach to North Korea, saying that the U.S.’s “policy of strategic patience has ended,” and that “all options are on the table.” Further, President Donald Trump took to Twitter on Friday to condemn North Korea for “behaving very badly.”

North Korea recently tried to launch four missiles that were meant to strike U.S. bases in Japan. Three of the missiles landed within 200 miles of Japan’s coastline.