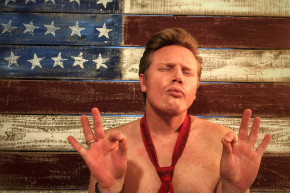 “My intentions at first were just for pure humor. I’m kind of a jokester,” he said of his decision to audition. “Now I’m kind of like the dog that got the car. Now I have it and I’m like, ‘Shit!'”

Even the possibility of being recognized and losing his job doesn’t worry him that much. “If it does get out and I lose my job, I’m okay with that,” he said. “I’m really not worried about my career. I don’t think I’ll ever run for office — and, who knows, maybe these days they’d be cool with that. I could be the next president you’re talking to.”

Brutal, who isn’t clear yet on just how much he’ll be paid, sees being porn’s Trump as a way to make some extra cash and possibly work toward starting his own business. “I have many hobbies, I love woodworking,” he said, quickly explaining that it wasn’t a double-entendre.