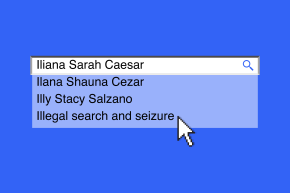 In an unprecedented request, local police in Minnesota have acquired a warrant that compels Google to surrender information on every person who used its service to search for a particular name.

The order was granted by a judge to local police in the Minneapolis suburb of Edina. Officers had initially requested the information directly from Google with an administrative subpoena, but the company declined.

The case centers on a local man whose photo, which is obtainable through a Google search, was used on a fake passport to fraudulently transfer $28,500 out of his bank account.

The warrant demands that Google surrender the information of every person who searched for the name of the fraud victim. It tells the company to give Edina police “any/all user or subscriber information” — including real names, IP addresses, dates of birth, and email addresses — that corresponds to users who searched for the victim’s name between December 1, 2016 and January 7, 2017.

The order also does not seem strictly limited to residents of Edina, meaning that if executed, police could obtain the information of every single person who searched for that particular name on those dates, regardless of where they live.

A spokesperson for the Edina police department did not respond to Vocativ’s request for comment.

The order is remarkable because the wide scope of the information it seeks is more reminiscent of the dragnet surveillance warrants granted by secret courts to federal intelligence agencies, like the National Security Agency, than a local police department. Legal experts say the warrant is likely unconstitutional, because it potentially would target innocent people who happen to perform the search in that timeframe.

“The Fourth Amendment was adopted in large part in reaction to ‘general warrants’ or ‘writs of assistance’ which allowed British agents to go house to house in search of contraband,” Andrew Crocker, a digital rights attorney with Electronic Frontier Foundation, told Vocativ. “Here, the warrant appears to be much like one of those general warrants that allows the police to sift through the web searches of many people in the town.”

The warrant documents were first discovered by Tony Webster, a Minneapolis-based journalist and transparency advocate, who posted the papers online after photographing them from a courthouse computer terminal.

A Google spokesperson confirmed to Vocativ that the company is refusing to comply with the order, saying that it will “continue to object to this overreaching request for user data, and if needed, will fight it in court.”

“We always push back when we receive excessively broad requests for data about our users,” the Google spokesperson said, in a statement.

If executed, the order could set a devastating precedent for digital privacy, essentially allowing police to obtain private data based on a broad set of parameters, rather than specifying a particular user account or IP address.

“I have a very hard time seeing how that could be a sufficiently particularized search,” said Crocker, the EFF lawyer. “Web searches are among the most sensitive information available, revealing intimate medical, religious, sexual details, on and on. The Fourth Amendment is intended to prevent such dangerous dragnet searches.”

Update 1: Friday, March 17, 2017: This article has been updated to include a statement from a Google spokesperson.

Update 2: Sunday, March 19, 2017: This article was updated with an expanded statement from Google confirming the company is fighting the judge’s order.