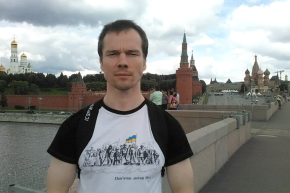 ‘They Beat Me’: A Putin Critic Speaks Out
By Marc Bennetts

‘They Beat Me’: A Putin Critic Speaks Out

Ildar Dadin, before he served time in one of Putin's most notorious prisons — via Wikimedia Commons
By Marc Bennetts
Mar 17, 2017 at 12:52 PM ET

It’s been a little over two weeks since Ildar Dadin, a civil rights activist opposed to President Vladimir Putin’s long rule, was released from Russia’s sprawling penitentiary system, and the memories of the torture he says he suffered at the hands of prison guards are still raw.

“They beat me for three days, cuffed my hands behind my back, and hung me up by the wrists,” he told Vocativ, during an interview in Moscow. “They also pulled down my shorts and said they would bring in an inmate to rape me if I didn’t call off my hunger strike. I was considering suicide, because I realised that they had broken me, both physically and mentally, and I couldn’t see the sense in living anymore.”

A former security guard who was inspired by the mass protests that broke out against voter fraud during Russia’s 2011 parliamentary elections, Dadin, 34, quickly became a familiar face at opposition rallies. In December 2015, he became the first and so far only person to fall foul of a controversial law cracking down on public dissent when he was jailed for three years, later reduced by six months on appeal. He had already spent almost a year under house arrest.

Under Russian law, Dadin should have been sent to a prison camp near his home in Moscow. Instead, he was transferred to a notorious penal colony in Karelia, a remote region in northwest Russia, where prison guards are said to torture inmates to the accompaniment of music by Lyube, Putin’s favorite Russian rock group. “I believe I was sent here deliberately, as punishment for my opposition activities,” Dadin said. Upon his arrival at the prison camp,  he was thrown into solitary confinement, ostensibly for hiding two razor blades among his possessions. Dadin claimed the blades were planted on him by prison guards, and he went on a hunger strike in protest. He says the beatings and torture that followed were overseen by the penal colony boss, one Major Sergey Kossiev.

“After they’d broken me, prison guards forced me to shout ‘Putin is our president,’” Dadin says. “I was ready to do and agree to anything by this stage. I’d been reading George Orwell’s 1984 before I was sent to the camp, and I remembered how the hero of the novel had been willing to agree to have his loved one tortured just so they would leave him alone. I realised I was very close to this state of mind.”

Dadin was animated throughout the interview, one of the first with Western media after his release, which took place at the headquarters of the For Human Rights Organisation in east Moscow. He would occasionally rise from his seat to demonstrate exactly how he was tortured. Although he was eager to speak, he often had trouble finding the right words to describe his ordeal. A former amateur boxer, he remains in good shape, despite having lost weight in the prison camp.  He expressed admiration for western democracy, but said he had been genuinely shocked when he heard about Donald Trump’s election victory while behind bars.

Dadin’s lawyer smuggled a letter out of prison detailing the abuse he was facing and handed it over to his wife, Anastasia Zotova, a former journalist. “I sat up all night wondering what to do,” she told Vocativ. “Would I make the situation worse for him by publicizing the letter? In the end, I decided I had to risk it.” The letter was published by Russian opposition websites, as well as a host of international media outlets. The case came to the attention of the European Parliament, which in December issued a resolution calling for Dadin’s “immediate and unconditional release.” He was also named a prisoner of conscience by Amnesty International.

Russian prison officials denied the torture allegations, and called Dadin “a talented imitator.” State-run television launched a smear campaign against Dadin, and accused him of making up stories about torture to draw attention to himself. The Investigative Committee, an FBI-style organization that answers only to Putin, also said it had found no evidence that Dadin had been mistreated.

But Dadin’s allegations of widespread abuse at the prison camp were backed up by his fellow inmates. Despite being held in separate parts of the camp, and never having met Dadin, prisoners have told human rights lawyers almost identical stories of torture. “They beat me twice a day for over nine months,” Koba Shurgaya, an inmate at the camp, said in December. “I was hung up by hands that were cuffed behind my back, with the cuffs attached to the metal bars located on the ceilings of punishment cells. I screamed from pain until I lost consciousness.”

In February, Russia’s Supreme Court quashed Dadin’s conviction on a legal technicality, a move that many observers, including Dadin and his wife, believe was ordered by the Kremlin after his case became a cause célèbre for international human rights organizations.

In an interview with Russian opposition media immediately after his release, Dadin had difficulty speaking, stumbling over his words as a result of a crippling stutter he had developed while behind bars. The stutter was less pronounced when spoke to Vocativ, but it was clear that the abuse he suffered has left deep emotional scars. While he said he finds talking about the torture cathartic, he also confessed that he had suffered palpitations after watching video footage that was aired by state television in December to “prove” he had not been harmed.

“These people are sadists who are given the green light by Putin’s facist regime,” he said. “The prison guards took pleasure from torturing me. When I had been hanging up by my wrists in an agonizing position for almost an hour, they took me down and laughed, saying ‘look, he’s going to fall over now.’ The penal colony boss also took obvious enjoyment from breaking me. When I said my constitutional rights were being violated, they forced me to shout that prison rules are a higher law than the Constitution.”

Before his arrest, Dadin was part of a tiny group of opposition protesters who staged small, unsanctioned rallies in Moscow against Russia’s war in Ukraine and Syria, as well as in support of political prisoners, among other causes. Like most of these protesters, Dadin is unaffiliated with any political party or movement, and he is ambiguous about high-profile opposition leaders such as Alexei Navalny, the anti-corruption lawyer, or Mikhail Khodorkovsky, the exiled oligarch turned Kremlin foe. Controversially, both men have said they would not return Crimea, seized by Russia in 2014, to Ukraine.

“Navalny and Khodorkovsky, and others who call themselves the leaders of the opposition, act like politicians, and not like people ruled by their consciences,” Dadin said. “They formulate their statements to take into account what the majority want, and not what is correct.”

Dadin’s incarceration has done nothing to lessen his desire to bring about change in Russia. The day after his interview with Vocativ, he was briefly detained during a protest outside the headquarters of Russia’s prison service. But he admits that the tiny street protests he and other opposition activists regularly attempt to carry out in central Moscow are “essentially senseless.”

“This is not going to change Russia,” he said. “Tens of thousands of people are not going to take to the streets tomorrow. But I refuse to give up the struggle, and abandon those political prisoners who remain behind bars. I want to remain a person, and not a silent accomplice of the fascist killers who are in power right now. I’ve no desire to die. I love life, but the more I fight for human rights, the more my fear of death decreases.”

He also accepted that the media coverage of his torture allegations may have served to scare people away from opposition protests ahead of next year’s presidential election. “While they denied I had been tortured, there was a clear subtext to the news reports that said “ ‘look, if you dare to go out and protest, you too could face brutal torture,’” he said.

He also had a message for his all “normal, honest” Russians: “If you want to see change, but are afraid of risking torture or the torture of your loved ones, then I would say this: Leave Russia, while you still can. Before the iron curtain comes down again.”