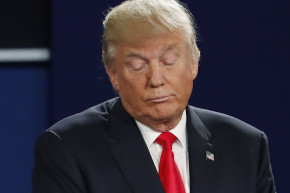 Trump’s Website Is Still Calling For A ‘Muslim Ban’

The president, who claims his order to restrict travel to the U.S. for people from six predominantly Muslim countries isn't a "Muslim ban," could use some help covering his tracks

President Donald Trump and his spokespeople have gone to great lengths to convince the American people — and federal judges — that his new travel ban, which prohibits people from six predominantly Muslim countries from traveling to the U.S., is not a ban targeting Muslims.

This distinction, however, is starkly contradicted by the months he spent crowing about banning Muslims on the campaign trail, and by statements of his that are still on his own website.

Trump’s official page, DonaldJTrump.com, was established during the campaign but still functions as a communication tool for the administration: three Trump-friendly news updates were posted to the site on Wednesday alone. It also features some oldies, including a press release from December of 2015 with the headline, “DONALD J. TRUMP STATEMENT ON PREVENTING MUSLIM IMMIGRATION.” The statement goes on to say Trump wants “a total and complete shutdown of Muslims entering the United States.”

“Without looking at the various polling data, it is obvious to anybody the hatred is beyond comprehension,” Trump is quoted as saying in the press release, referring to supposed hatred by Muslims for the United States. “Until we are able to determine and understand this problem and the dangerous threat it poses, our country cannot be the victims of horrendous attacks by people that believe only in Jihad, and have no sense of reason or respect for human life.”

Since a federal judge shot down his initial attempt at a travel ban in early February, Trump and his cronies have shouted from the mountain tops about how the president’s executive order restricting travel to the U.S. — the second version of which was shot down on Wednesday by a federal judge in Hawaii — is not a “Muslim ban.”

Nowhere in either of Trump’s orders does it say anything specific about Muslims or Islam. But, as both judges who’ve reviewed the travel bans have determined, the intent is to ban Muslims. Trump confidante Rudy Giuliani said as much during an interview with Fox News in January, claiming that Trump came to him and said he wanted a “Muslim ban” and asked that the former New York City mayor assemble a commission to figure out “the right way to do it legally.”

Despite the White House’s denials that the president’s travel restrictions don’t constitute a Muslim ban, the judiciary isn’t buying it, least of whom U.S. District Court Judge Derrick Watson, who wrote in his 43-page ruling that the president’s plan is “fundamentally flawed.”

“Equally flawed is the notion that the Executive Order cannot be found to have targeted Islam because it applies to all individuals in the six referenced countries,” Watson added. “It is undisputed, using the primary source upon which the Government itself relies, that these six countries have overwhelmingly Muslim populations that range from 90.7% to 99.8%.”

“It would therefore be no paradigmatic leap to conclude that targeting these countries likewise targets Islam,” Watson added. “Certainly, it would be inappropriate to conclude, as the Government does, that it does not.”

At a rally of his supporters Wednesday night, Trump lashed out at the ruling, calling it “judicial overreach” and vowing challenge it to the Supreme Court.