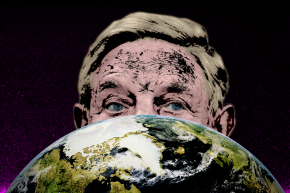 A brief history of how the liberal billionaire investor turned into, in the eyes of some on the far right, an evil mastermind trying to enslave humanity

Photo Illustration: Vocativ
By Jennings Brown and Jacob Steinblatt
Mar 30, 2017 at 7:00 AM ET

He lurks in the shadows of all sinister decisions made by the globalist elite. He bankrolls every anti-conservative protest and funds the mainstream media propaganda machine. He wants the world to burn so he can create a New World Order and rule over all humanity. He’s George Soros. Or at least he’s a version of George Soros that conspiratorially-inclined conservatives have created.

These days, even casual news consumers can’t avoid fear-mongering headlines about Soros. A recent report from Fox News, “‘Day Without a Woman’ supporters got $246M from Soros” misleadingly suggested Soros funded the Women’s March-organized strike. Actually, according to the research that Fox News used for the story, Soros donated to 100 of the 544 Women’s March partners — and did so over 15 years. The last of these donations was two years ago. He certainly influenced the movement, but he doesn’t seem to have funded the actual protest.

Some objective truths about Soros: He has a net worth of $25.2 billion dollars, making him the 27th richest person in the world. He is a Hungarian Jew who fled to England during the Nazi occupation, then studied at the London School of Economics. He began his career working in merchant banks then moved on to hedge funds. He donates to many philanthropic and progressive political causes through his Open Society Foundation. He is a staunch critic of Donald Trump. His most recent anti-Trump op-ed was published March 16 in The New York Times.

The president’s approach to immigrants does nothing to make America safer and has created a surge in hate crimes. https://t.co/3X9QwzB1QK

But over the last 20 years, Soros has gone from a rags-to-riches immigrant investor and political donor to enemy number one of the far right. Using Media Cloud, a media analysis tool created by MIT, Vocativ searched for mentions of Soros in mainstream media and conservative partisan media, which includes Breitbart, Daily Caller, Gateway Pundit, and InfoWars. The results show that the right-wing sites mention Soros over three times as often as mainstream media sites. Since June 2016, Soros was mentioned 7,983 times in the conservative outlets, but only 2,473 times in mainstream news.

This article does not attempt to determine whether Soros is simply a billionaire investor who supports liberal causes, an evil mastermind worse than any Bond villain Ian Fleming could have dreamed up, or somewhere in between. It simply provides a brief history of how he became one of the right’s obsessions.

Soros stepped onto the international stage in 1992 when he earned $1 billion by betting against the British pound during the Black Wednesday currency crisis, and became known as “The Man Who Broke The Bank of England.” Soon after, he started appearing on national news shows, like Charlie Rose, speaking about his philosophical views and his efforts to build open democratic societies.

On November 5, 1997, Ted Koppel interviewed Soros for an episode of ABC’s Nightline, “The World According to George Soros.” It included interviews with other scholars and journalists, like Richard Morais of Forbes who said of Soros: “He’s largely treated like a saint in most of the media, and I think that’s a very dangerous situation.” And Michael Lewis, author of “Liar’s Poker,” who said: “He will use his money very aggressively to attack what he thinks is bad.”

These themes persisted in coverage of Soros throughout the 1990s, but at the time it seemed to resonate more on the left, according to Jesse Walker, author of “The United States of Paranoia: A Conspiracy Theory” and book editor of Reason magazine. “I first started encountering anti-Soros invective in the 1990s,” Walker told Vocativ. “Interestingly, it was coming from the left — people were worried that he was buying up the movement (or, in a less conspiratorial vein, that the possibility of chasing Soros dollars would distort the independent left’s activities).”

Walker also noticed that resentment toward Charles G. Koch and David H. Koch followed a similar pattern. The Koch brothers operate Koch Industries, the second-largest privately owned company in the nation, and have used their wealth to fund and influence libertarian and conservative causes. “The first place anti-Koch talk took hold was in certain sectors of the libertarian movement. It was a libertarian activist, Sam Konkin, who coined the word ‘Kochtopus.’ This was in the late ’70s or early ’80s, decades before the Koch brothers became designated villains for the left.”

Conservatives and Republicans became more wary of Soros in the the late 2000s, thanks in large part to Fox News. In April 2007, Bill O’Reilly opened his show “The O’Reilly Factor” with a nearly 10-minute segment (video here, transcript here) on George Soros, who he describes as “off-the-charts dangerous” and “an extremist who wants open borders, a one-world foreign policy, legalized drugs, euthanasia, and on and on.”

“‘The Factor’ has been investigating far left billionaire George Soros, a man who wants to impose a radical left agenda on America. And under the radar, he is making great progress,” O’Reilly opened, before presenting a chart and explaining the complex web of foundations that Soros uses to influence politics. This flow begins with the Open Society Foundation which donates to the Tides Foundation, which funds “a variety of radical hatchet men” like those involved with “vile propaganda outfit Media Matters, which specializes in distorting comments made by politicians, pundits, and media people.” O’Reilly explained that Media Matters hands over propaganda to mainstream media, including NBC News, The New York Times, Newsweek, and PBS. Soros also gives money to the Democracy Alliance Group and the Center of American Progress, run by John Podesta, and Move On, which “organizes demonstrations promoting left-wing causes.”

“So you can see how powerful this guy Soros has become,” O’Reilly said. “He can smear anyone he wants in a variety of ways. His organizations can raise millions for politicians, who will do his bidding. Thus, he can demand that politicians running for office do what he tells them to do.”

This segment from a decade ago includes many of the same dog-whistles that make conservative ears perk up today: mainstream media, organized liberal demonstrations, open borders, and Podesta.

O’Reilly then brought on two commenters, radio host Monica Crowley and Phil Kent, a PR consultant and author of the book “Foundations of Betrayal: How the Liberal Super Rich Undermine America.”

Kent takes the scary story up a notch. “George Soros is really the Dr. Evil of the whole world of left-wing foundations,” Kent said. “In fact, one of his most chilling quotes a few years ago was that the main obstacle to a stable and just world is the United States. He really hates this country.”

The quote Kent referenced was from Soros’ 2006 book “The Age of Fallibility,” and it was a critique of George W. Bush’s nationalistic foreign policies. Here’s the full quote (emphasis ours):

The main obstacle to a stable and just world order is the United States. This is a harsh — indeed, for me, painful — thing to say, but unfortunately I am convinced it is true. The United States continues to set the agenda for the world in spite of its loss of influence since 9/11, and the Bush administration is setting the wrong agenda.

You should never mention “world order” if you’re a politically influential public figure and you don’t want to be connected to globalist conspiracy theories. At the heart of many paranoiac ideologies is the firm belief that a small group of elites is trying to build a New World Order, a global governance that could enslave most of humanity. Any time a powerful person mentions a “world order,” fringe journalists seize on the comment as proof of the existence of a secretive cabal that wants to rule the planet. In “The Age of Fallibility,” Soros mentions “world order” several times. One chapter is even called “What’s Wrong with the World Order.” It’s two chapters after “What’s Wrong with America?”

Less than two years later, Glenn Beck joined Fox News and made Soros one of his main targets. In November of 2010, Beck dedicated two episodes to exposing the “puppet master” George Soros. With the aid of three giant chalkboards, a wooden pointer, props, literal marionette puppets, and his signature condescending professorial tone, he explained the twisted web of corruption and deceit that George Soros’ “shadow party” (does that sound familiar?) has wound around the American political system. Soros’ ultimate goal, Beck explains, is to build “one world government” and then take power.

Beck concluded by explaining that he himself has stockpiled a year’s worth of food and he encouraged his viewers to do the same. Then Beck said if nothing extreme happens within two years, “mock me all you want.”

Seven years later, Soros still has not taken control of the world. But those special episodes — which were heavily promoted on Fox News — made perhaps one of the strongest cases against a single private citizen to an audience of more than two million Americans.

At the time, Michelle Goldberg, author of “Kingdom Coming: The Rise of Christian Nationalism,” wrote in The Daily Beast that the program “was a symphony of anti-Semitic dog-whistles. Nothing like it has ever been on American television before.” She states that a lot of Beck’s ideas “only makes sense within the conspiratorial mind-set of classic anti-Semitism, in which Jews threaten all governments equally. And as a wealthy Jew with a distinct Eastern European accent, Soros is a perfect target for such theories.”

Walker believes Soros’ Jewish heritage is the reason he inspires wilder conspiracy theories than other billionaire political donors. “It’s not just everyday Republicans who don’t like him; there are also, for example, anti-Semites, and anti-Semitic conspiracy theories can get pretty baroque,” Walker said.

Since the Fox News hosts began dedicated segments and episodes to Soros, the man has become a permanent fixture in right-wing conspiracy theory forums, blogs, and radio shows. In the last six months there have been more than 800 Soros-related posts on the subreddit /r/conspiracy, one of the most popular conspiracy theory forums. A Google search for article about Soros appearing on Infowars.com, turns up about 19,300 results. They range from the obvious (Backstab: Republican Leaders Funded By Soros) to crude (George Soros Craps In America’s Punch Bowl) to apocalyptic (George Soros Is About To Overthrow The U.S. and Trump Pulls World From Brink Of Nuclear War: Soros Outraged)

Once Bernie Sanders started using his presidential candidacy to call out the Democratic establishment and the billionaires that fund it, progressive liberals began latching on to Soros-theories just like the early days. The second-most upvoted anti-Soros post on /r/conspiracy advocates for Sanders.

Over the course of the election, Twitter mentions about Soros surpassed “Koch” mentions for the first time, and those mentions have only exploded since then.

After all these years of far-right pundits calling for pitchforks and torches, an anti-Soros fire is now raging in conservative news and social media. Recently, virtually every time a Trump protest makes national news, there are hyper-partisan media headlines that show Soros’ connection to those efforts, spun in a way to make it look much more calculated and conspiratorial than it actually is.

Yes, Soros has invested in many political organizations and leaders over the last several decades, and he’s more open about how he spends his money and what he believes than most superrich political donors. So it doesn’t take a gumshoe journalist to connect the dots between Soros’ dollars and progressive causes. But it does take a paranoiac imagination to turn those dots into a constellation that shows how one man is plotting to take over the world.