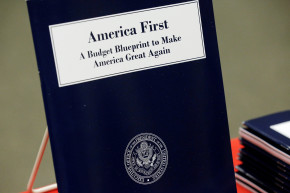 What You Could Buy With Trump’s $52.3 Billion Defense Increase
By Sara Morrison

What You Could Buy With Trump’s $52.3 Billion Defense Increase

President Trump unveiled a partial $1.07 trillion budget blueprint on Thursday that cut overall discretionary spending by $2.7 billion but increased defense spending by $52.3 billion. He accomplished this by slashing budgets in other departments, including Health and Human Services, the State department (both of which lost the most funding in dollars) and the Environmental Protection Agency (which lost the largest percentage of its funding). Several agencies saw their funding cut entirely, including the National Endowment for the Arts, the National Endowment for the Humanities, and the Corporation for Public Broadcasting.

The United States already spends far more than the rest of the world on its military (at $56 billion, the United Kingdom’s entire military budget for 2015 was slightly more than Trump’s proposed increase alone) despite all of Trump’s campaign rhetoric about how the Obama administration decimated the “very weak” military.

Perhaps that $52.3 billion could be better spent somewhere else. If you’re not into a well-funded National Endowment for the Arts or the various environmental programs and grants for people with lower incomes (including one that partially funds the Meals on Wheels program) that money was taken away from, here are a few more suggestions for how to spend $52.3 billion. Some may appeal to you; others will probably appeal more to Trump, who could buy his favorite social media platform five times over with that kind of money.