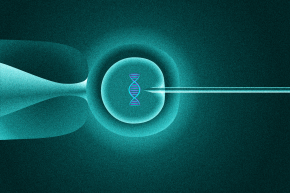 The United Kingdom has granted its very first license for a clinic to create “three-parent babies.” This means doctors there will soon be creating embryos using DNA from two women and one man.

The procedure, known more technically as “early pronuclear transfer,” replaces the mitochondria in one woman’s egg with that from another woman before fertilization. It is meant to reduce the likelihood of certain genetic diseases being passed on to a baby. It was approved in the U.K. late last year, but a regulatory agency, the Human Fertilisation and Embryo Authority (HFEA), today announced that it had given the official go ahead to a clinic Newcastle University.

“Patients will now be able to apply individually to the HFEA to undergo mitochondrial donation treatment at Newcastle, which will be life-changing for them, as they seek to avoid passing on serious genetic diseases to future generations,” said Sally Cheshire, the agency’s chair, in a statement.

That is to say, this doesn’t mean that there will be a three-parent-baby free-for-all in the U.K. The clinic is currently the only one with a license to practice the procedure, but patients will still have to get approval from the agency on a case-by-case basis.

The move comes following research finding evidence that the procedure is safe. That hasn’t stopped anti-choice organizations in the U.K. from protesting “this genetic modification of human beings” as “potentially dangerous.” The procedure has not been approved in the U.S., where any sort of embryo research is controversial.

“The team here at Newcastle Fertility Centre is delighted with the HFEA’s decision to grant our clinic a license to offer treatments to prevent transmission of mitochondrial DNA disease,” said Mary Herbert of Newcastle Fertility Centre in a press release. “It’s a great testament to the regulatory system here in the UK that research innovation can be applied in treatment to help families affected by these devastating diseases.”