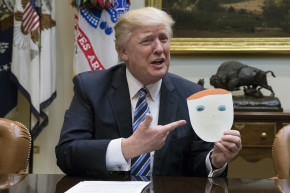 Instead, people have responded with stories about how the ACA has saved them

But if Trump has any outstanding quality, it’s finding a way to succeed despite overwhelming unpopularity, and he usually does this by driving up the opposition’s negatives (see: Clinton, Hillary). To that end, the White House solicited “Obamacare horror stories” yesterday in hopes of crowdsourcing the administration’s next attack line, but given that the ACA has provided insurance for millions of poor, young, and middle-class Americans, people instead took to Twitter to show how the law has helped them.

@POTUS : my disaster story: just diagnosed with cancer. Thanks to #Obamacare I have coverage and won't die uninsured and unable to pay.

Do I share the story how my cancer-surviving wife is now covered if i lose employment (existing conditoins clause)? (thx #Obamacare !) pic.twitter.com/gZgj3TFxO7

@POTUS Obamacare gave me a hearing aid; paid for my cancer screenings and has helped me care about my health and future. FU President Turd!

@POTUS it impacted me by covering my mom's cancer care with – thx #Obamacare!

@POTUS my mother is undergoing cancer treatment. I owe that to Obamacare.

@WhiteHouse @POTUS the #ACA saved my life. I found out I had #CANCER. I am alive today because of #Obamacare. Your plan is the same problems

@foxandfriends @realDonaldTrump It's a lot easier to fight cancer now that #Obamacare requires all healthcare policies to cover chemo!

@POTUS I'm a cancer patient and the owner of a small business, so I depend on #Obamacare to obtain insurance. #ThanksObama NO TO THE AHCA

1)The WH asked for stories re Obamacare. I shared mine. Obamacare saved my husbands life(heart attack, cancer), autistic sons have medicaid.

Health care policy is often described as a series of tradeoffs—some people benefit while others don’t. Obamacare is not without its warts. Some people did respond to Trump’s call with legitimate gripes about their premiums going up or having to change doctors. But many others made complaints about the ACA that seemed misplaced given what the law does, or their “horror story” was an empty partisan word salad about freedom and socialism.

This pushback is happening offline, too. People anxious about losing their insurance if Obamacare is repealed have turned congressional town halls into angry fracases, which has made moderate Republicans skittish about repeal and given red state Democrats political cover for opposing changes to the ACA. The only congressional bloc with an appetite for full repeal seems to be the House conservatives.

Meanwhile, the replacement bill unveiled by House Speaker Paul Ryan, dubbed the American Health Care Act (AHCA), has been panned by the Congressional Budget Office as a tax cut for the very wealthy at the expense of the very poor masquerading as a health care plan. Trump, as is his wont, has given mixed signals on the bill. The confusion and bad publicity has led to a series of brutal polls for Republicans on health care; left-leaning Public Policy Polling found just 24 percent support the AHCA.

And, at least on Twitter, the responses in support of Obamacare vastly outweighed the complaints, which isn’t what Trump was looking for.