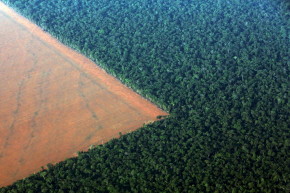 Companies Promise To Stop Deforestation. Are They Lying?
By Ethan Harfenist

Companies Promise To Stop Deforestation. Are They Lying?

As environmentalism becomes more mainstream and consumers grow more aware about the means of production, private sector entities have increasingly committed to zero deforestation policies. A new report released Wednesday analyzes hundreds of deforestation commitments by companies linked to palm, soy, timber and pulp, and cattle, and finds that more and more firms are being transparent about their progress toward such pledges.

The report, Supply Change: Tracking Corporate Commitments to Deforestation-free Supply Chains, 2017, analyzes 447 companies that have made 760 commitments to curb forest destruction in supply chains connected to these “big four” commodities. These agricultural products can be found essentially every consumer good on the planet, and according to the report, combine to make up for a third of global deforestation.

The good news is that the report indicates that transparency surrounding these commitments is on the upswing: information is available for 51 percent of commitments tracked over a two year period — up from 36 percent from last year’s report. Further, among a 347-group “control” set that had commitments at the time of analysis for both the 2016 and 2017 reports, 57 percent more pledges contain transparent reporting, compared to a year ago.

“Corporate commitments to deforestation-free supply chains continue to gain momentum as stakeholders demand more sustainable businesses and products. As companies move to address these demands — and the ever-growing threats to their supply chains, including climate change — we’re learning that meeting these goals is easier said than done,” Stephen Donofrio, Senior Advisor for Supply Change, said in a statement.“There is a pressing need for transparent information about these commitments, and for companies to publicly disclose progress toward meeting them. Doing so ensures that these goals don’t fall into neglect, especially as many deforestation commitments approach their target deadlines.”

However, the report also identified 271 companies whose supply chains are connected to any combination of the “big four” agricultural products that have no public commitments to deforestation.

Donofrio told Vocativ that reporting information about commitments is important because companies can’t control what stakeholders — whether that’s consumers or investors or watch dogs — will assume about them. The report notes that palm and timber and pulp “lead the way” in terms of transparency due to well-established certification programs and the amount of attention deforestation due to palm oil receives. However, deforesters such as the soy and cattle industry, despite inflicting a heavy toll, still count very low commitment rates.

“It’s encouraged to provide updates however and wherever possible,” he said. “There’s differences in the ways these commodities are transferred from production to user, and there’s different pressures from various stakeholders on different commodities.”

Additionally, despite providing illuminating figures about the state of agricultural commodities and deforestation, the report does not mention any companies by name. According to Donofrio, this is to avoid “passing judgment on companies.” However, curious consumers can head to supply-change.org to look up companies and see where they stand.

The report, nevertheless, highlights the importance of the private sector in spearheading certain conservation measures, especially when governments and other institutions lag behind of global trends.

“With the possibility looming that certain governments will step back, private sector leadership on ending deforestation and fighting climate change becomes even more important,” Forest Trends Founding President and CEO Michael Jenkins said in a statement accompanying the report. “This third Supply Change report signals that we are committed to partnering to help build the tools and experience necessary to ensure these businesses can reach their goals, and to ensure that society makes critical progress on combating climate change.”