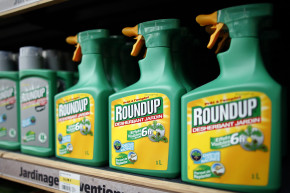 Monsanto's Roundup weedkiller atomizers on sale at a garden shop — REUTERS
By Allee Manning
Mar 15, 2017 at 11:04 AM ET

An ongoing court case against agrochemical and biotechnology giant Monsanto Co. centers around the claim that the corporation failed to adequately warn farmers about the allegedly carcinogenic properties of glyphosate, a key ingredient in its “Roundup” weed killer. Adding to the accusations, plaintiffs now allege, according to Reuters, that Monsanto’s shady practices extended to having employees ghostwrite a scientific study initially used to evaluate the pesticide and collude with the U.S. EPA.

Court documents that included e-mails between Monsanto employees seem to suggest Monsanto had a hand in writing research later attributed to impartial scientists in 2013 and 2000. “We would be keeping the cost down by us doing the writing and [the scientists] would just edit & sign their names so to speak,” one Monsanto executive wrote in an e-mail. The scientists have disputed that Monsanto was in communication with them as their review of glyphosate was conducted.

Other unsealed e-mails brought former manager of the EPA’s pesticide division, Jess Rowland, into the court proceedings for his supposed involvement in furthering Monsanto’s agenda. As reported by The New York Times, Rowland (who is retired) allegedly worked to halt investigations of the chemical by the Agency for Toxic Substances and Disease Registry on behalf Monsanto. “If I can kill this I should get a medal,” he allegedly told a Monsanto regulations manager. That review did not end up taking place.

Monsanto has denied these claims in a public statement that counters “plaintiffs’ attorneys are taking a single comment in a single email out of context to attempt to mischaracterize the role of a Monsanto scientist.”

“Science is always a collaborative process. Our scientists often exchange ideas with, provide information to, and collaborate with third-party experts. As a company built on sound science, these collaborations are critical to our ability to deliver new tools and innovations for farmers, and they are governed by the highest principles of integrity and transparency.”

Whether or not glyphosate is in fact a carcinogen remains controversial. The EPA determination that it is safe, made in 1993, was first called into question after studies revealed higher rates of cancer in farmers who used it. That was followed by at least 60 lawsuits from agricultural and landscape workers who alleged their long-term exposure resulted in non-Hodgkin’s lymphoma beginning in 2015. Several hundred more suits of this nature are pending throughout the country.

However, on Wednesday, the European Chemical Agency concluded that it was not carcinogenic, contradicting an expert review commissioned by the World Health Organization that said it “probably” is two years ago. The very same day, a California judge ruled that bottles of Roundup must be labeled as a possible cancer threat in a separate but related lawsuit filed by Monsanto against California’s Office of Environmental Health Hazard Assessment.