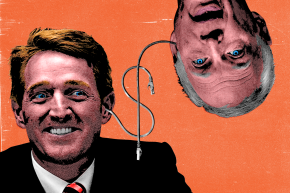 Analysis shows the 22 Republican senators behind a controversial resolution have received more than $1.7 million from the industry in recent years

Curious why anyone would support a controversial new Congressional push to make it even easier for your internet provider sell your data to advertisers without your knowledge? The 22 Republican senators behind it have received more than $1.7 million from the industry since the 2012 U.S. election, a Vocativ analysis shows.

At issue is a joint resolution, introduced by Senators Ron Johnson (R-WI) and Jeff Flake (R-AZ), to undo a rule, created by former President Barack Obama’s Federal Communications Commission, which took effect in December. Under the FCC’s direction, the rules force internet providers to tell their customers which of their data is sold for marketing purposes and allow them to opt in or out of sharing sensitive customer information. At the time, it was widely praised by privacy and consumer advocates.

The resolution is remarkable because it’s hard to find any support for it except from the internet and telecom industry that sells such information, said Laura Moy, Deputy Director of Georgetown University Law’s Center on Privacy and Technology.

Flake and Johnson’s office didn’t respond to questions about what benefits the resolution could provide for consumers.

“I think generally, if you ask the average person, they more or less think companies should get permission for sharing their information,” said Neema Guliani, legislative counsel at the ACLU, which opposes the resolution, told Vocativ.

“They make these arguments as though there’s some balance of arguments on both sides, for and against privacy,” Moy said. “Consumers universally want stronger privacy protections, and it’s just the companies that don’t want to give it. They’re just throwing as much money as they possibly can at this problem to make it go away. And they might succeed.”

Indeed, a coalition of major internet providers and related telecommunications trade groups, an industry that historically heavily donates to U.S. political campaigns, does strongly support it. A look at eight of the country’s largest providers, as well as five of the trade groups that signed a letter in January in favor of overturning the rules, show that in the last six years, they gave a total of at least $1,726,288 to those 22 senators — an average of more than half a million dollars per election cycle.

Those figures are pulled from the Center of Responsive Politics, a nonprofit that tracks donations to candidates. For the companies — Verizon, Time Warner, (now owned by Charter), Comcast, AT&T, CenturyLink, Cox, and T-Mobile — this is the combined giving between employees and that company’s related Political Action Committee. For Charter, as well as the trade groups CTIA, USTelecom, NCTA, ITTA, and ITIC, it’s just that organization’s respective PAC. The figures are not comprehensive, as they don’t include gifts from the American Advertising Federation, the Association of National Advertisers, the Interactive Advertising Bureau, the Direct Marketing Association, the Network Advertising Initiative, all of whom also signed that January letter and are registered lobbying groups.

That only Republicans signed the letter isn’t an indication they alone receive money from the telecom industry: It also gives heavily to Democrats, though no one from that party has publicly signed on. The House has introduced a companion joint resolution, signed by 17 representatives, all of them Republicans.

A potentially bigger concern, Giuliani, the ACLU lawyer, told Vocativ, is that if the resolution passes both houses and is ultimately signed by President Trump, it would prevent the FCC from creating similar privacy rules in the future. Thanks to the Congressional Review Act, if the joint resolution passes, it would also prevent the FCC from making similar rules in the future

“It’s more than just an indication that Congress disapproves of something or would like minor changes,” Giuliani said. “It has this long term future effect: to undermine the ability of the agency to act in a similar way in the future even in changing circumstances.”

“Technology is evolving. The way companies work is evolving,” she said. “Do you really want to undermine the ability of the FCC to respond to changing technologies and future abuses? Even if you disagree with the rule, is this really the avenue with which you want to demonstrate your disapproval?”