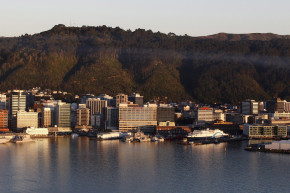 In the 12 weeks after Donald Trump was elected, applications rose 70 percent

New Zealand may frequently get omitted from world maps, but it has become one of the hottest destinations for Americans hoping to escape the United States after the election of President Donald Trump.

According to the Associated Press, which obtained immigration records from New Zealand’s Department of Internal Affairs, the number of Americans who applied for a grant of citizenship for the tiny South Pacific nation jumped 70 percent in the 12 weeks after the U.S. election in November. The records also show an 18 percent rise in the number of Americans who received work permits in New Zealand. More people from the U.S. are also simply visiting New Zealand, renowned for its grand landscapes famously featured in the “Lord of the Rings” film trilogy.

Without a native New Zealand family connection, would-be citizens require a grant of citizenship. Overall, 170 Americans applied for citizenship by grant from November 8 to January 31, up from 100 the same period a year before. Those applying for citizenship by descent rose 11 percent, from 183 to 203.

“It’s an extremely livable place and you can see and palpably feel the difference in how society is organized, and what people prioritize,” said Alanna Irving, a 33-year-old tech startup entrepreneur originally from San Francisco who has been living in New Zealand for six years. “New Zealand is a place that cares about equality, I think more. It’s less individualistic, more community-minded,” she told the A.P. Although she isn’t yet a citizen, Irving said she would be applying later this year.

In the two days following the U.S. presidential election, the A.P found that 10 times the number of Americans logged onto New Zealand’s Department of Internal Affairs website than the same two days one month earlier.

Though Canada is usually the first place where Americans threaten to flee when political contests don’t go their way, many Americans have taken to social media over the last few months to express their desire to relocate to New Zealand. One Reddit user, a U.S. citizen who identifies as LGBT, posted in the city-focused subreddit r/Auckland to ask for tips, also saying that they are moving “to escape Donald Trump.” Others posted on Twitter:

@kurteichenwald I met 2 different gay couples. One moving to Canada, other moving to New Zealand. This crazy man has made so many afraid.

It remains to be seen how many Americans will actually make good on their pledges to move more than 6,000 miles away. The good news is that there’s plenty of room: New Zealand is one of the most sparsely populated countries on Earth, and sheep outnumber its population of 4.8 million by about six to one.