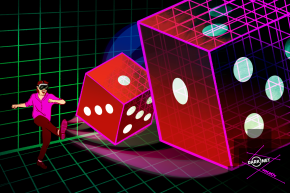 The man crosses the street toward the bar. He takes cash from the ATM next to the entrance before walking in. Inside, the patrons, almost all middle-aged men, drink and smoke, their faces lit by the screens of video lottery machines. The man sits at the bar and thinks about whether to join them. He slides off the barstool, puts his money in a slot, and pushes the button. Five rows of glowing icons spin and settle. Each row has a cartoon cherry cluster but only two line up. He tries again. He gets frustrated and grunts a curse. Again. He tries to smack the machine but only swipes the air.

The man isn’t actually gambling — he’s an addict getting treatment through a cutting-edge virtual reality exercise. “When we remove the goggles, they’re all so shocked by their reaction,” said Stéphane Bouchard, founder of the Cyberpsychology Laboratory at Université du Québec en Outaouais. “Then they realize that if they react that strongly in virtual reality it will probably be much stronger in real-life situations, which means that they’re not ready to go back in a casino.”

Bouchard has been researching therapeutic VR for 18 years. As a clinical psychologist focused on anxiety disorders, he realized VR was an easy, ethical way to help people face their fears. He was able to trigger patients’ anxieties, in a safe environment, while helping them retrain the part of the brain that deals with emotions. Over the years, he started using the technology to fight addiction, too. By eliciting the cravings that come when someone is around the substance or activity they’re addicted to, he can work with people while their thoughts are being guided by emotion instead of logic.

“If a patient is addicted to cocaine, I can talk with the patient forever, but what really matters is how he or she deals with the situation when cocaine is in front of that person,” Bouchard said. “The best thing I would like to do in therapy is to actually offer cocaine to the patient — but that obviously is not possible.”

But when it comes to addictive activities, like gambling, he can evoke that emotional state without making the patient consume an illegal narcotic. “I would need to go with them into the gambling scenario. But therapists don’t want to do that because they feel like they’re sleeping with the devil.”

Digital devils, on the other hand, aren’t so frowned upon. While the idea of IRL casino therapy makes many patients and therapists nervous, there’s less to fear with a simple video game you can turn off at any moment. Plus, it’s easier to control the environment and intensity. If a mental health professional takes a vulnerable recovering gambling addict to Caesar’s Palace or a sex addict to a brothel, it could cause enough of a sensory overload to push them into relapsing right after the therapy session.

In Bouchard’s VR exercise, he eases the subjects into the water. If the therapist determines a gambling addiction patient is ready for the VR program, they begin the simulation outside of the bar. The patient decides whether they’re ready to withdraw money from the ATM. The therapists asks the patient to rate their cravings on a scale of 1 to 100. If they’re still low, the patient proceeds. They sit at the bar. Then to the video lottery machine. At every step, the therapist checks in to see if the patient should stop, and asks questions like: What can you do to prevent yourself from actually gambling? What are the chances you’ll actually have fun? Is it logical to think that you can actually beat the odds this time?

The therapist tries to find the exact point where the patient feels the urge but can still control those urges. That is the moment when Bouchard believes therapists can make breakthroughs.

Bouchard’s laboratory in Gatineau, Quebec, includes programmers, graphic artists, animators, sound specialists, and computer engineers who designed the immersive programs — one is a bar with games and one a full casino. They met with therapists to storyboard the simulation and visited a local casino and bar for inspiration. The owners even let them record sounds to include in the virtual venues. The resulting VR program is currently for sale to other researchers.

But this process is still in the research stage. In February, Bouchard and his team published the article, “Using Virtual Reality in the Treatment of Gambling Disorder: The Development of a New Tool for Cognitive Behavior Therapy,” in the journal Frontiers in Psychology, including three studies showing VR can help patients when used under the guidance of a therapist.

The first study compares VR-induced cravings to real gambling cravings, and uses Scrabble as a control. It revealed that VR immersion can in fact elicit a stronger desire for gambling addicts than it can in people who don’t gamble often. And for the addicts, that desire is just as strong as it is when they play a real video lottery game. This answered perhaps the biggest question for this type of therapy: Does VR treatment for gambling addiction work when there isn’t actually any real money to be lost or won?

In fact, it worked so well that some subjects started echoing their gambling rituals. The researchers noticed one subject putting his hands in his back pants pockets. When the researchers asked him about it he explained that every time he gambled he would first take out $100 and put one $50 bill in one pocket and one $50 bill in the other — an attempt at self-restraint that rarely worked out. “Several gamblers put the goggles on and they tell you it won’t work because it’s not a real machine,” Bouchard said. “As soon as they get in the virtual casino they start swearing about machines and making money and then they hit the machine. They get pissed and they freak out.”

The second study focused on the need for a treatment protocol during this sort of VR therapy and the last study showed that VR treatment does not lead to lasting, uncontrollable urges. “We don’t want to induce too much cravings and have side effects,” Bouchard said. “If you trigger the desire to gamble and after a therapy session they go out and gamble their fortune and commit suicide, it’s kind of the fault of the therapist.”

Now that the researchers have determined that the treatment is safe and effective, they have begun randomized control trials in an outpatient clinic for gamblers. It won’t be a miracle cure, but it’ll be a new tool that will help therapists deal with an addiction that has been connected to a higher rate of suicide attempts than any other addictive disorder. In about three years, Bouchard expects mental health professionals will be able to start implementing this technique into their therapy.

By then, real non-therapeutic virtual casinos will probably be much more popular and accessible. An October report from Juniper Research, a British firm, predicted that wagers from VR gambling will grow from about $58.5 million to $520 million by 2021 — an 800 percent increase over five years. Now, instead of playing Texas Hold’em on your desktop, you can put on Oculus Rift or HTC Vive goggles and transport to your spot at the poker table.