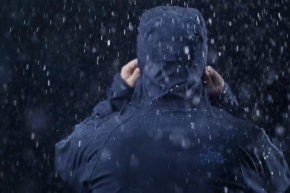 It's mood music (and an advertisement)

Sometimes you want to listen to music that matches your mood, say some slow jazz when it’s cloudy. Now, Spotify wants to match your music to the weather’s mood.

The music streaming site partnered Austin-based band White Denim to stream their latest song “No Nee Ta Slode Aln” only in areas that it is raining. The whole gimmick is part of a partnership with The North Face to sell a new rain jacket.

Spotify managed to hide this song from dry regions in the U.S. by using geotargeting, which is the same technology it uses around the world to promote other brands.

Vocativ attempted streaming the song during Tuesday’s thundersleet in New York City, but it did not work—guess it has to strictly be rain. However, for those who love the White Denim, they can listen to a clip on YouTube.

Uploaded By: The North Face

It’s unclear what other partnerships Spotify has in mind or if it’ll be working with bigger artists, but it’d be interesting to see someone like Katy Perry release an exclusive song that only streams when it’s windy — and you feel like a plastic bag drifting through the wind.