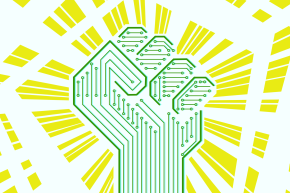 Like many places, Silicon Valley has seen its fair share of turmoil in the days since Donald Trump’s administration has come to power in the White House.

Protests erupted within major tech companies like IBM and Facebook following a closed-door meeting between Trump and tech CEOs in January. Thousands of employees have pledged online to never help Trump build a registry of Muslims or immigrants, while others have expressed outrage at the noncommittal and sometimes comfortable stance their companies have taken with the new administration.

Now, the tech community is taking to the streets with a walkout and protest on Tuesday, coinciding with the famously-nerdy math holiday of Pi Day. The organization Tech Stands Up planned the protest as a way for tech workers to get engaged and urge their companies to take stronger stances against Trump’s discriminatory policies, like the now-lightly-revised executive order banning travelers from six Muslim-majority countries.

“We’re calling on employees of these companies to organize and put pressure on their tech leaders to promote social equality and inclusion, and not just talk about it,” Brad Taylor, a software engineer and the founder of Tech Stands Up, told Vocativ.

While the event has since removed any mention of Trump from its title (it was originally called “Tech Stands Up Against Trump”), the protest comes after tech employees began putting both public and internal pressure on companies to steer away from collaborations with the new administration.

Just after the election last November, one IBM employee quit and scores more expressed outrage after CEO Ginni Rometty personally offered the company’s services to Trump in a cozy congratulatory letter. That same month, thousands of tech workers signed a “Never Again” pledge saying they would refuse to help build a registry of Muslims or immigrants for the Trump administration, promising to quit their jobs if necessary.

But despite the recent mobilizations, many question whether big tech companies will take a truly adversarial approach to the Trump administration — especially if it affects their bottom line.

Some Silicon Valley companies have publicly stated they would refuse to help Trump build a registry of Muslims or immigrants, and others have come out against Trump’s executive orders on immigration. But many of those firms take in millions of dollars from government contracts, and it’s often difficult to know to what end their services and technology will ultimately be used. And some, like billionaire Peter Thiel’s infamous data-mining company, Palantir, provide surveillance technologies that specifically enhance the government’s ability to target immigrants and other groups.

More broadly, the Valley’s entire business model of venture capital-fueled big data is fundamentally at odds with its noble intentions, argues Aral Balkan, an independent software designer and human rights advocate. In the end, he says, the principles of expansive and disruptive innovation that many big tech companies cling to “directly perpetuates the systemic inequality that people have rebelled against in electing Trump.”

“I’d love to understand what these Silicon Valley values are, because from where I’m standing, they appear to be the colonial values of an oligarchy of mostly privileged white American men,” Balkan told Vocativ. “When Oxfam tells us that eight men today have the same wealth as half of the world’s population combined, and when those eight men include Silicon Valley oligarchs like Mark Zuckerberg, Larry Ellison, Bill Gates, and Jeff Bezos, you can’t tell me that Silicon Valley values are anything but the values of the 1%.”

“If Silicon Valley Tech wants to stand up, it should do so to take a good long look in the mirror,” Balkan added.

The organizers of Tech Stands Up have made some effort to address tech’s reputation for being predominantly white and overwhelmingly male. Speakers at the event in Palo Alto include Maria Gonzalez, a janitor at Facebook, and Jacky Espinoza, a café worker at Cisco Systems and member for Unite Here, a labor organization advocating for workers’ rights in the service and hospitality industries. Just under half of the speakers are women.

Taylor says the event in Palo Alto will also let tech workers volunteer to work for a host of local labor, social equality, and legal organizations that need their skills — like a kind of community job fair. He says the goal is to encourage tech workers to use their talents to continue advocating both inside and outside the walls of their corporate offices, as well as take responsibility for issues like affordable housing and homelessness, which the tech industry’s fast-paced disruption has infamously exacerbated over the years.

“Engineers are very sought after in the industry, and we feel we should use that power to help put pressure to live up to those values,” says Taylor.  “If we’re gonna have company values that include things like inclusion, innovation, diversity and empathy, then we really need to stick up for those values and not just make them hoodie slogans.”

As of press time, a number of tech companies have not replied to Vocativ’s request for comment about the walk out. This article will be updated if responses are received.