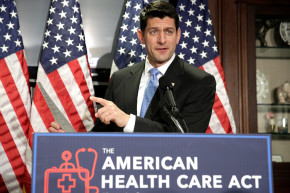 The Congressional Budget Office Report On Trumpcare Is Here

24 million will probably lose insurance under the proposed plan

The Congressional Budget Office has released its analysis of the cost of Trumpcare (also known as the American Health Care Act) and its probable ramifications for the American people. To the surprise of virtually no one — including the people behind Trumpcare — it’s not good.

Though President Trump stated multiple times during his campaign and after he was elected that a new health plan under his presidency would “take care of everybody” and be cheaper and better than Obamacare, the CBO report says that 24 million will probably lose insurance in the next decade under the proposed plan, 14 million of whom will lose insurance in 2018 alone. At the same time, it will reduce the federal deficit by $337 billion over 10 years.

Most likely sensing that the report would cast a grim picture of American life under Trumpcare, Republicans tried to get out in front of the report by casting doubt on the CBO’s ability to accurately evaluate their plan; Trump’s press secretary, Sean Spicer, said last Wednesday that “if you’re looking at the CBO for accuracy, you’re looking in the wrong place.” He pointed to the CBO’s report on Obamacare to show how the office’s numbers can be off, though ABC News pointed out that a 2015 Commonwealth Fund report said the CBO’s predictions more accurate than most, though they were still off by millions of people (this could be attributed to the number of Republican states that refused to expand Medicaid, something that came after the CBO’s report and which it did not predict). Rep. Paul Ryan, the Speaker of the House, has said that dire-seeming numbers about millions losing health insurance because of Trumpcare are meaningless, because his plan would give Americans the choice of whether or not to have insurance while Obamacare mandated that they had to.

“The one thing I’m certain will happen is CBO will say, ‘Well, gosh. Not as many people will get coverage,'” Ryan told CBS News. “You know why? Because this isn’t a government mandate. This is not the government that makes you buy what we say you should buy.”

Democrats are certain to use the CBO’s report to attack Trumpcare. It’s very possible that Republicans who oppose the bill (and there are several) will join them.

The CBO is a nonpartisan group designed to provide Congress with independent analyses and estimates of, among other things, proposed legislation and how much it will cost.