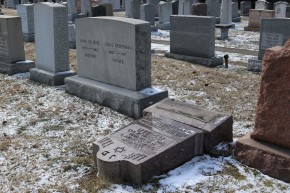 It’s Come To This: An App For Reporting Anti-Semitic Incidents
By Allee Manning

It’s Come To This: An App For Reporting Anti-Semitic Incidents

The Jewish Security Application aims to assist authorities and victims

Following several waves of anti-Semitic threats and acts of vandalism in the United States, there will soon be an app for the specific purpose of reporting their occurrences and alerting the affected community.

A mobile phone app, called the Jewish Security Application, will soon be distributed by the Community Security Service, a New York-based nonprofit that works to protect the American Jewish community through security training and support. Once it is fully operational and widely released next month, it is intended to allow users to message the group, upload videos and photos of evidence, and immediately alert local authorities.

Since the beginning of January, over 160 anti-Jewish incidents have been reported in the U.S. and Canada, according to the Anti-Defamation League. So far, only one related arrest has been made. While attacks on the American Jewish community are not new, their pointed nature and the dismissive tone President Donald Trump took in addressing them before finally calling them “horrible” in late February have brought the recent occurrences into the spotlight. In a rare united front, all 100 senators have urged Trump administration higher-ups to assist local law enforcement in upping security and prosecution in these instances.

Though the app has been in production for a while, the timing of the launch is not coincidental. “We were already in pilot programs,” said the group’s executive director Jason Friedman, “…[but] the heightened awareness and unprecedented threats against Jewish institutions did prompt a release a bit earlier than we had earlier planned for.”

The purpose of the app is not to serve as a replacement for alerting authorities the old fashioned way but rather to help all members of the Jewish community stay aware, Friedman said.

Upon seeing something suspicious or concerning, users can open the app and fill out a web form detailing an incident. After it is analyzed by the CSS team and trained volunteers, the reporter will receive follow-up questions or advice, and (depending on threat level) app users in the vicinity of an incident can be informed in near real-time. Law enforcement will also be given access to the reported incidents, and the app features a panic button that can be used to immediately inform local police should the incident progress to emergency status while the observer is making their report.

“Each community member has a critical role in security,” he said. “If we can connect the dots across regions, even across county and city lines, that empowers not just one person but a whole community to build a network to look at trends and allow for things to be spotted in a quicker manner.”