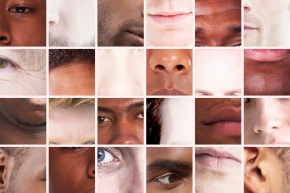 The epidemic of police violence against black men and women has made national headlines in the past few years, with the most recent research suggesting black people are nearly three times more likely to be killed by the police.

As three researchers note in a new paper published by the American Psychological Association, a common theme emerges after such acts of violence: Police officers often thought of the black victims as more physically menacing than they actual were.

The authors point to the case of Dontre Hamilton, an unarmed black man that a white police officer shot 14 times and killed in Milwaukee in 2014. The officer later tried to justify his actions by saying Hamilton was so muscular he could have overpowered any cop—yet the autopsy recorded Hamilton’s vital stats as 5’7″ and 169 pounds. That disparity could just be evidence of an after-the-fact excuse, but the researchers considered whether such cases might also point to a meaningful psychological difference in perception.

In a succession of studies, the researchers asked nearly 1,000 online participants to judge the height, weight, muscularity, and strength of black and white men based only on photos of their faces. All participants in the survey, both white and black, consistently overestimated the measurements for black faces relative to white faces, even though the men pictured were all of similar size. In another experiment, participants were shown the exact same, racially ambiguous body. When the person was labeled as black, participants thought he was taller and heavier than those who were told he was white.

To the authors, this suggests a deep-seated bias about the height, weight, and general build of black men. It’s not surprising black people would be affected as well by this societal bias — psychologists Kenneth and Mamie Clark demonstrated way back in the 1940s how institutional racism like school segregation could make black children believe themselves inferior to white kids. In this new study, a difference emerged when the researchers asked participants whether the person appeared threatening and if police force would hypothetically be justified if that person were a suspect. Only the white participants felt the perceived greater size of the black faces made them greater threats and more potentially deserving of force.

So what drives this racist difference in perception? The authors suggest a connection with other research about how people overestimate the physical size and proximity of rivals or threats. This can take a lot of forms, with the researchers noting other examples like how we tend to overestimate how close spiders are, or how New York Yankees fans consistently underestimate the distance of Boston’s Fenway Park compared with non-fans. Meanwhile, the fact this effect was stronger in male survey participants than women might point to what the authors term the “male warrior” hypothesis, where men evolved to be more competitive with those they perceive as outsiders.

While intriguing, those possibilities deserve skepticism, particularly when the researchers stress this is just a limited laboratory experiment and can’t hope to accurately capture real-world decision-making. And whatever the case, this study can’t speak to the deeper issue of why a white-dominated society judges black men to be a greater threat. But it does suggest that, once that threat is established, everyone in that society start to see the world differently, with potentially tragic ramifications.