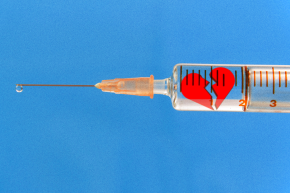 A new study shows that failed fertility treatments aren’t just figuratively heartbreaking — they are also associated with an increased risk of actual cardiovascular disease, including heart failure and stroke.

“We found that two-thirds of women never became pregnant after being managed for fertility treatment and these women also had worse long-term cardiovascular risk, specifically higher risks of stroke and heart failure, compared with the remaining third of women who did become pregnant and delivered a baby,” said lead author Jacob Udell, a scientist at the Institute for Clinical Evaluative Sciences, in a press release.

Talk about adding insult to injury — or injury to insult.

The study, published in the Canadian Medical Association Journal, looked at more than 28,000 women who received fertility therapy with either human menopausal gonadotropins or gonadotropin-releasing hormone, which are used to stimulate the ovaries. Researchers found that the failure rate was high — only 32.9 percent gave birth within one year after their final treatment. During a followup just over eight years later, researchers found that the annual rate of cardiovascular events was 19 percent higher among women who did not give birth following therapy than those who did.

The researchers offer a couple theories for why this might be. One is that, as the study puts it, “fertility treatment may be innocuous and merely unmask a latent predisposition to premature cardiovascular disease among individuals at risk of infertility.” The other is that ovarian hyperstimulation can lead to complex fluid shifts in the body that leaves it vulnerability to cardiovascular events.

But the researchers say more research is needed before this raised risk is truly understood — and that they aren’t trying to cause alarm or caution women against fertility treatment. “We are instead suggesting that as women age, they should stay mindful of their health and remind their physician about any fertility therapy years earlier,” said co-author Donald Redelmeier in a press release. “It can be an opportunity for their doctor to review other risk factors for heart disease and discuss ways to protect against future cardiac problems.”