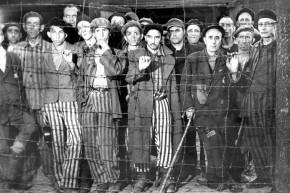 Switzerland, head of international body, wants to reach young people to ensure past is "part of the present"

Most kids learn about the Holocaust in school, through textbooks, still photographs, and grainy black and white videos. But now, activists are working to make it possible for people to learn about the horrors on their iPads.

The International Holocaust Remembrance Alliance, an intergovernmental group representing 31 countries, announced its plan to make an app with the help of Switzerland’s Center for History Education and Memory Cultures at an event in March. The app, which has now been demoed by over 70 students, is called Fliehen vor dem Holocaust, which translates to “Escaping the Holocaust.”

As the holders of this year’s annual chairmanship to the IHRA, Switzerland’s delegation aims to “reach young people to ensure that the past remains part of the present,” through modern technology. The goal is for this interactive approach — which has users hear testimony and explore photographs from firsthand witnesses — to help humanize victims and survivors more so than traditional teaching methods.

The question of how and when to incorporate new technologies into media projects relating to the Holocaust is something people have been exploring in recent years. It is already possible for people to take virtual tours of many Holocaust museums and memorials, though some experts maintain that even multidimensional presentations of these sites could not replace the experience of actual visits. Documentarian Ken Burns also recently crated his own documentary on the lives of the refugees of Nazi-occupied France that featured a VR companion piece.

Peter Gautschi, department head of the Center for History Education and Memory Cultures, recalls learning about the Holocaust as a student in Switzerland 30 years ago through textbooks and documentaries.

“Documentary films told that story of something far away that [seemingly] had nothing to with Switzerland,” he sadi. “I was very much interested in history, but I know I had colleagues who didn’t like that and found it boring. [Now], teachers are always looking for possibilities to teach this topic.”

In the future, Gautschi says the Center hopes to expand access to all 400,000 Swiss students.