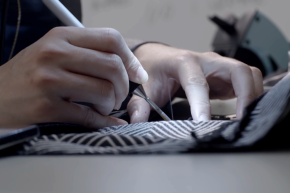 An old style with a tech twist, developed with Google's help

Denim jackets are an article of clothing that all people should have. It’s an iconic style that stays cool no matter the era. But can the jean jacket look stay cool when Levi’s and Google turn it into a $350 “smart” jacket?

The renowned denim company partnered with Google to develop a smart denim jacket that’s capable of answering calls, giving directions, control music, and offering information about nearby places. The team behind “Project Jacquard” used tiny circuits and conductive yarn that can be woven into any textile (hats, shirts, pants, etc.) to produce touch- and gesture-sensitive surfaces, which are then controlled with a cufflink-like device called a smart tag.

The smart tag looks and works very similar to a fitness band or tracker and is packed with LED and haptic sensors that vibrate when receiving phone notifications via Bluetooth. Those wearing the jacket can tap on the smart tag to answer calls, change tracks they’re listening to their music.

Levi’s smart jacket stands out from previous wearable tech because it’s actually washable and stylish. Most smart clothing looks like it was borrowed from a ridiculous sci-fi movie from the ‘80s.

Levi’s jacket was first slated to hit the market in spring 2017, but due to unknown delay, the jacket will now go on sale fall 2017 for $350. Although the jacket is not yet available for purchase, Levi’s has already started giving demos. The clothing company showcased a batch of its smart jackets at the South By Southwest Festival in Austin, Texas and is also running consumer trials with both the jacket and the app user interface.