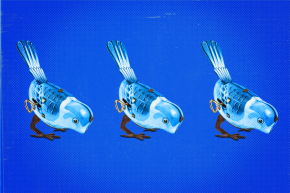 Up To 15 Percent Of Twitter Users Are Bots, Study Says
By Sara Morrison

Up To 15 Percent Of Twitter Users Are Bots, Study Says

As anyone who follows social media behavior and the 2016 presidential election probably knows by now, Twitter is full of bots: up to 47 million of them, according to a new study from Indiana University and the University of Southern California.

The study used a “Twitter bot detection framework” created by Indiana University that analyzes accounts for hundreds of features and behaviors typically associated with bots. The data set came from active English-speaking users, so it doesn’t include, say, Mexico’s “army of Twitter trolls” or bots used for ISIS recruitment. Nevertheless, there’s plenty of evidence that America has its own Twitter bot armies to contend with: the last president election saw bots from both sides posting content in support of their candidates, though there were considerably more Trump bots than Clinton bots. And the Trump bot army appears to be alive and well even after his election.

The new study estimates that between 9 and 15 percent of Twitter accounts are bots. According to Twitter’s own statistics of 313 million active users, that puts the number of automated accounts at between 28 and 47 million. The study’s percentages are significantly higher, it notes, than the 5 to 8.5 percent estimate Twitter estimated in 2014 (Twitter’s most recent earnings statement said just 5 percent of its active users were “false or spam” accounts, but acknowledged that its numbers might be too low). The study says that the 15 percent may be conservative with the more sophisticated bots that have been developed over time to escape bot-detection software.

Twitter told CNBC that not all bots are bad, pointing out that “many bot accounts are extremely beneficial, like those that automatically alert people of natural disasters…or from customer service points of view.” Other studies have shown that bot accounts send a disproportionate number of tweets possibly aimed at influencing political discourse: an analysis of accounts that tweeted about the United Kingdom’s Brexit vote, for instance, showed that less than 1 percent of active users generated nearly a third of Brexit-related tweets — a level of activity that indicates the bulk of those users were bot accounts trying to carpet bomb Twitter with tweets supporting their respective sides.