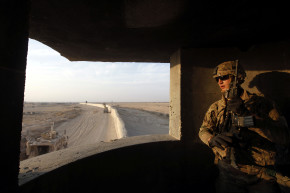 Is The U.S. Using White Phosphorus In Iraq?
By Gilad Shiloach

Is The U.S. Using White Phosphorus In Iraq?

ISIS is claiming that U.S. forces have used white phosphorus in residential areas of Mosul, Iraq, raising concerns among human rights groups which say the application of the incendiary material against civilians may constitute a war crime.

“The enemies of Allah claimed that they don’t use chemical substances or white phosphorus in Mosul, but you can see these remnants,” said a masked militant in a video posted by the group on Saturday. On Amaq News agency, an official ISIS propaganda branch, ISIS vowed to carry out a chemical attack against U.S. forces as retribution.

An ISIS-affiliated channel on Telegram, moreover, claimed that 146 people were killed and 109 were injured as a result of white phosphorous shelling on Mosul over the past three days. The numbers could not be independently verified.

“Oh leaders of the Islamic State, your supporters around the world ask you to attack the Crusaders and Shiites with a chemical weapon and exterminate them,” wrote a prominent user on al-Minbar, a leading online forum used by ISIS supporters. Another user there shared a manual for creating chlorine gas at home, which he said should be used against “the infidels.”

White phosphorus is a self-igniting weapon that can be used as a smoke screen to mask the movement of forces on the ground, mask the origins of fire, or can be used to signal to other troops.

According to international law, the use of the material is forbidden in civilian areas, since it can also cause severe, thermal and chemical burns when it comes into contact with the flesh. It can burn the skin down to the bone. Amnesty International has classified its use inside, or in the vicinity of, civilian areas as an indiscriminate attack and a possible war crime.

However, the potential attacks on Mosul are not the first use of WP as an “incendiary weapon.” Last October, ISIS claimed that several villages near Mosul were attacked with WP. The claim was backed up by Amnesty International, which reported having received credible witness accounts and photographic evidence of white phosphorus projectiles fired over an area north of the village of Karemlesh, about 12 miles east of Mosul.

Previously, the U.S. used WP as an “incendiary weapon” during the battle to reclaim the Iraqi city of Fallujah from al-Qaeda-affiliated militants in 2004. It was reported that the U.S had supplied Saudi Arabia with white phosphorus munitions in its war in Yemen, based on images and videos posted to social media.

Iraqi forces, backed by a U.S.-led coalition, have reclaimed around 30 percent of west Mosul from ISIS, local Iraqi senior commanders have told Reuters. Mosul was the most important ISIS stronghold in Iraq. Battles surrounding the city are the largest U.S. offensive in Iraq since the American invasion in 2003.