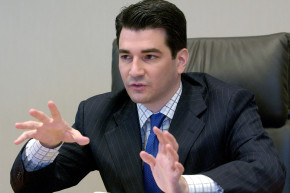 The physician is swimming in drug industry money and ties

President Donald Trump’s new vision for the Food and Drug Administration may soon be carried out by a former Bush appointee and prominent friend of Big Pharma.

As reported by Reuters, Scott Gottlieb, 44, is expected to be nominated for the position of FDA commissioner. Gottlieb, a physician by training, has previously worked in the federal government, serving as a FDA deputy commissioner during George W. Bush’s first term. While Gottlieb’s views are less controversial than those of other previously rumored candidates, consumer advocates are worried he will deepen the FDA’s already at times unhealthy relationship with pharmaceutical companies.

“Dr. Gottlieb is someone who has an unprecedented web of financial ties and conflicts of interest to the pharmaceutical industry,” Dr. Michael Carome, director of the Public Citizen’s Health Research Group, told Vocativ.

As a venture capitalist who has funded many medical startups, Gottlieb has long had a vested interest in the drug industry. He’s also served on the boards of five pharmaceutical companies in recent years, including the sixth largest in the world, the UK-based GlaxoSmithKline. And according to data from Open Payments, a federal program established by the Affordable Care Act that tracks financial gifts doctors receive from drug and medical device companies, Gottlieb has earned over $400,000 directly from the industry from 2013 to 2015, mostly in consulting fees.

Because of these corporate ties, Carome notes, Gottlieb had to often recuse himself from many decisions during his stints at the FDA — a trend that would only pick up should he receive the top position. With Gottlieb leading the agency, however, Carome thinks that no amount of recusals could negate the impact of his presence.

“It’s going to be impossible for him to untangle himself from these conflicts,” Carome said. “When weighing the balance between protecting patients and public health and promoting the interests of the pharmaceutical industry, this sort of history really signals someone who is going to make decisions favoring the industry.”

These decisions would likely include reforms aimed at further deregulating the drug approval process. Gottlieb, also a resident fellow at the conservative American Enterprise Institute, has written prolifically about the ills of regulation, both those imposed by the FDA and newer ones established by the Obama administration’s Affordable Care Act. He’s likewise argued that stripping the agency of its power and speeding along the drug approval process would indirectly help relieve rising drug costs by promoting competition between companies to develop similar products.

“There’s no reason to expect companies that are able to bring drugs to market faster are going to lower the costs of their drugs.” Carome offered, as a rebuttal to Gottlieb’s views. “They’re going to push the costs as far as they can, as far as the market will bear.”

Many of Gottlieb’s supporters have noted that whatever his stances, they are not as extreme in comparison to others previously considered for the position — in particular, Jim O’Neill, the former federal official who is currently the managing director of Trump advisor Peter Thiel’s investment firm Mithril Capital. Neill had infamously argued in the recent past that the FDA should allow any drug onto the market so as long as it’s proven safe, without stopping to check if they actually work.

But the idea of Gottlieb being a safer choice for the FDA provoked audible laughter from Carome on the phone.

“Given his professional lifelong ties to the industry and given his advocacy for tolerating more uncertainty about the safety and effectiveness of drugs, there’s great reason for concern,” he said. “His deregulatory approach will ultimately be bad for public health and bad for patients.”