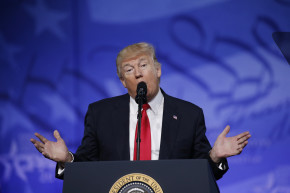 The president's 2016 victory "may have fractured community norms of civility and chivalry," researchers say

A study conducted by professors at Donald Trump’s alma mater suggests a link between the 2016 presidential election and male attitudes towards women.

For their study titled “Trumping Norms,” set to be published in May’s edition of the American Economics Review, Wharton professors Jennie Huang and Corinne Low analyzed negotiation tactics used by people participating in a controlled experiment — before and after Trump’s election. Pairs of people were given $20 dollars and the option to split the money two ways: $15 for Person A and $5 for Person B, or $15 for Person B and $5 for Person A. Failure to divide the money up as directed resulted in people getting nothing.

But the game also was a “Battle of the Sexes,” in which men and women went up against each other. While the first set of experiments, conducted in October, showed that men were “more likely to offer the higher payoff to female partners,” after the November election, men were more combative, adversarial, and “aggressive” toward women, according to the study.

“The general increase in aggression, and decrease in effective coordination, coupled with the specific increase of aggression towards women, suggests that the Trump election may have fractured community norms of civility and chivalry,” the researchers wrote.