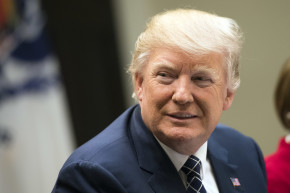 Donald Trump has made the term “fake news” a frequent battle cry in his ongoing war against the press. Yet, on Thursday, a website well-known for peddling conspiracy theories attempted to revive a tale so tall that even Trump himself has (reluctantly) called it bunk: that Barack Obama was some sort of Kenyan Manchurian Candidate who was born in Africa and therefore ineligible to be president.

A right-wing conspiracy theory site writing about conspiracies isn’t particularly newsworthy — but for the fact that this particular conspiracy theory website has White House press credentials and a reporter who attends the daily press briefings. (That reporter, Lucian Wintrich, is an outspoken Trump supporter, most famous, perhaps, for creating “Twinks4Trump,” a photo series of shirtless young men wearing Trump’s iconic “Make America Great Again” baseball hats during the campaign.)

Under the headline “Breaking: Malik Obama Tweets Alleged Barack Obama Birth Certificate in Kenya,” Gateway Pundit regurgitated a photo that the Trump-supporting half-brother of Obama posted on Twitter. It photo shows what appears to be a Kenyan birth certificate for the former president, which, obviously, is absolute proof that he wasn’t born in Hawaii and his presidency was therefore illegitimate. If you believe that, Malik Obama also has a bridge he’d like to sell you.

The supposed birth certificate in the photo tweeted out by Mailk Obama is the same phony birth certificate that made the conspiracy theory rounds in 2009, not longer after the “birtherism” fiasco was born — when people like Trump and crackpot attorney/tin-foil-hat-wearing conspiracy theorist Orly Taitz were hell-bent on proving Obama was not a U.S. citizen. It didn’t take long for fact-checking websites like Politifact to debunk the faux-document, which claimed to be issued by the Republic of Kenya in 1942, by simply emailing a spokesman for former Kenyan Prime Minister Raila Odinga.

“It’s a forgery. Kenya only became a Republic in December, 1964. Other arguments could also be marshaled, but they are not needed,” spokesman Salim Lone told Politifact in a 2009 email. As the website notes in its debunking of the hoax birth certificate, even a columnist for World Net Daily — a well-known conspiracy theory website — knocked down the document’s authenticity.

Gateway Pundits’ seat in the White House briefing room has garnered criticism from media watchdog groups, particularly the left-leaning Media Matters, which described the publication’s White House correspondent, Wintrich, as a “dangerous troll” with “little reporting experience but ample ties to ‘alt-right’ harassment.” As proof, the organization posted a photo on Twitter of Wintrich and Gateway Pundit co-founder Jim Hoft standing at the lectern in the White House briefing room and making “Pepe” hand signals, which are often associated with the white nationalist ideologies and hateful rhetoric of the “alt-right” and its symbol, a cartoon frog called “Pepe.”