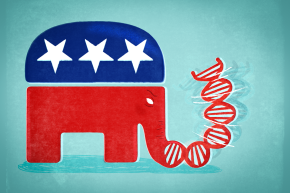 Republicans Want To Help Companies Discriminate Based On Employee DNA

Republican lawmakers have advanced a bill that would allow companies to force employees to surrender genetic test results, eliminating privacy protections intended to prevent workplace discrimination based on their DNA.

The bill, called the Preserving Employee Wellness Programs Act, would weaken provisions of the Genetic Information Nondiscrimination Act of 2008 by creating a loophole for so-called “workplace wellness” programs, which can compel employees to give employers their genetic information under threat of higher health insurance costs.

On Thursday, the legislation passed through the House Education and Workforce Committee after a mark-up, with all 22 committee Republicans voting for it and 17 Democrats opposing. It comes as part of a slew of healthcare measures accompanying the GOP’s renewed effort to repeal the Affordable Care Act.

Companies with these “voluntary” programs would gain significant coercive power if the bill is signed into law. It would allow companies to charge employees up to 30 percent more for health insurance premiums — an additional $5,443 annually on average — if they refuse to participate in a workplace wellness program.

The justification behind the programs, according to the $8 billion wellness industry that advocates them, is that having access to genetic information allows companies to better assess their employees’ health risks. But past independent studies have shown the programs have little, if any, real benefit for employees, and in many cases actually lose money for the employer.

More importantly, once a company has genetic information, the potential for abuse evokes a smaller-scale version of the dystopian sci-fi film GATTACA. The data could easily be used to discriminate against employees based on their DNA, using genetic indicators to gauge aptitude and increase premiums based on factors like susceptibility to disease — in other words, exactly the kinds of treatment the 2008 genetic privacy law was written to prevent.

Several scientific organizations have blasted lawmakers for the bill, saying that it grants companies even greater coercive power over their employees’ most sensitive health information.

“If enacted, this bill would force Americans to choose between access to affordable healthcare and keeping their personal genetic and health information private,” said Derek Scholes, PhD, the director of science policy at the American Society of Human Genetics, in a press release. “Employers would be able to coerce employees into providing their genetic and health information and that of their families, even their children.”

The issue of genetic privacy has become widely discussed in recent years, as cheaper access to genetic sequencing has spurred the popularity of at-home DNA testing services like 23andMe. Local police departments have faced lawsuits over an alarming practice of collecting DNA samples from innocent citizens on the street, in some cases specifically targeting young African-Americans. And earlier this week, Canada’s parliament introduced that country’s own genetic nondiscrimination law, following in the footsteps of the U.S. one from 2008.