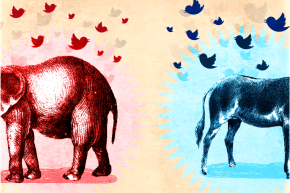 You might have heard this mentioned once or twice in the past year, but there’s a chance the United States is getting more politically polarized. But as popular as this notion is, it’s actually not the easiest thing to measure. That’s where Twitter comes in, and a new survey puts numbers to our views

In a preprint of an upcoming paper, two researchers looked at 679,000 Twitter users to see how their political behavior has changed over the past eight years. Looking at a few different measures, the researchers found users had become about 10 to 20 percent more politically polarized over those eight years. It’s tricky to say whether Twitter, which has only existed since 2006, merely reflects this change or had a hand in shaping it, but such a shift is worth understanding either way. After all, 62 percent of Americans get some or all of their news from social media, although Facebook is much more popular than Twitter.

The researchers, from Alto University in Finland and the Qatar Computing Research Institute, were looking at years’ worth of tweets from hundreds of thousands of users, so it wasn’t possible to look at the content of specific tweets. Rather, they considered whether the media and political accounts users followed skewed to one side of the spectrum or not, whether people retweeted a mix of political opinions or just one type, and how partisan their hashtags were. By all of these metrics, users showed they were more politically polarized in 2016 than 2009. The researchers points out this tracks with increasing polarization in other venues, including the U.S. House of Representatives.

The paper has its limitations: Since Twitter was only founded in 2006, it’s not possible to look back further than the end of George W. Bush’s presidency, and the platform itself was also generally used differently early on than it is today. Even so, the study includes a good chunk of recent political history, including the 2012 and 2016 elections and the 2010 and 2014 midterms.

It’s always worth being careful when talking about political polarization, as it can imply there are only two sides in American politics (which isn’t true), and they are both equally far from some mythical center that doesn’t exist. But there’s a relatively sound underlying point here: People are drifting further apart in how they interact with one another online, and that’s bound to cause problems when it’s time to move offline — especially when, as the researchers point out, the U.S. now has a president whose Twitter use freely mixes the two together.