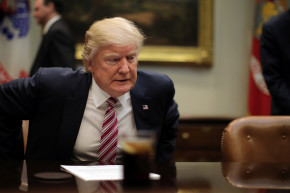 Trump’s ‘Real’ Unemployment Rate Is A Sad 9.2%
By Sara Morrison

Trump's first jobs report is good news ... unless you judge it by the standards he judged Obama's.

The Bureau of Labor Statistics’ monthly jobs report for February came out on Friday, showing the first full month of the Trump presidency and what he will no doubt happily take credit for as long as the numbers are good. And they were good … as long as you don’t judge them by Trump’s own standards when applied to his predecessor.

The BLS said there were 235,000 jobs added in February (the biggest gains — construction — were 58,000 of those jobs, a boost that the Washington Post said could have been helped by the unseasonably warm weather) and the unemployment rate, though “little changed,” as the BLS put it, decreased from 4.8 to 4.7 percent.

Trump touted those numbers with a triumphant retweet of Drudge Report’s “GREAT AGAIN: +235,000.” Putting aside how many of those new jobs can be credited to the previous administration, which had 75 consecutive months of job growth, and Trump’s own 2012 tweet warning that the country needed “over 300k new jobs a month” or fall into a recession, 235,000 new jobs is nothing to sneeze at.

Too bad Trump consistently disparaged the same jobs report when Obama was in charge, often saying that its unemployment rate was not the “true” rate, which he said was anywhere from twice as high to nearly half labor force. While that 42 percent unemployment rate is ridiculous, Trump did have a point that the real number of unemployed people is higher than what the jobs report calls the “official” number, because it doesn’t account for long-term unemployed people who have given up looking for work or people who have part-time jobs but want or need full-time work. That number is nearly twice as high as the official unemployment rate, which Trump previously called a “phony number” and a “complete fraud” (while, of course, often vastly exaggerating the “real unemployment” rate).

Unemployment rate only dropped because more people are out of labor force & have stopped looking for work.Not a real recovery, phony numbers

7.8% unemployment number is a complete fraud as evidenced by the jobless claims number released yesterday.Real unemployment is at least 15%

So let’s go with what Trump has cited as the “real” unemployment rate. And that is … 9.2 percent. Oh. But the good news here is that this number is down from last month (9.4 percent), and has, like the official unemployment rate, been trending downwards over the last several years as the country recovers from the Great Recession.

There’s also the labor force participation rate — the percentage of people out of the entire eligible workforce who are employed or unemployed but looked for work in last month — to consider. That rate has dropped overall since the early 2000s, and could be an indicator that a lot of people have simply dropped out of the workforce because there are no jobs for them, or it could mean that a lot of people have dropped out of the workforce because they retired (thanks, Baby Boomers). There’s also the rise of machines that can do jobs that were previously done by humans to consider. That’s just progress, which is something Trump won’t be able to prevent. That hasn’t stopped him from blaming the falling labor participation rates on Obama.

Welcome to the @BarackObama recovery–the labor force participation rate is at a NEW 30 year low of 64.3% https://t.co/7SRYZNQ1

If you include people who have left the work force, unemployment rate is 15%. Labor participation rate is lowest in 70 yrs.

Of course, these numbers, while promising (or, in the words of a conservative website whose articles about the monthly jobs report Trump has previously referenced, “more mundane than spectacular”) come too early in Trump’s presidency to indicate that he will be the “greatest jobs president that God ever created,” as he promised during his campaign, and for Trump to have had all that much to do with them. But that didn’t stop conservatives from blaming the terrible jobs report numbers that came early in Obama’s presidency on Obama, and it probably won’t stop them from attributing good numbers to his successor. It certainly hasn’t stopped Trump, whose press secretary said on Friday that the job report “may have been phony in the past, but it’s very real now.”