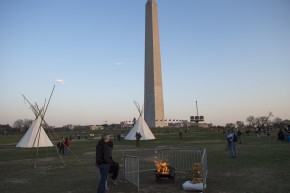 Despite legal setbacks, the Standing Rock Sioux have taken their protest to the White House

It’s been two weeks since federal law enforcement forced Dakota Access Pipeline protesters out of the Oceti Sakowin campsite in Cannon Ball, North Dakota, but the Standing Rock Sioux tribe has not given up its fight to halt the completion of the controversial pipeline.

Members of the tribe and protesters sympathetic to them kicked off a four-day protest on Tuesday by setting up tepees on the lawn of the National Mall in Washington, DC. Throughout the week, protesters held drum circles, prayers, and lobbied leaders in the Capitol. Friday morning, they marched through the city despite high winds and freezing rain.

“Remember three weeks ago, Trump said that he has never received a phone call from anybody stating that they didn’t want Dakota Access Pipeline?” asked Waniya Locke in a Facebook live video that circulated through #NoDAPL Facebook groups. “Well guess what, Trump. We’re here in D.C. and we’re ready to march in opposition of Dakota Access.”

The march on Friday began at the office of the Army Corp of Engineers, the government agency charged with overseeing the completion of the pipeline. While marching through the streets of Washington, protesters beat a droning rhythm on drums and chanted “black snake killer,” a reference to a Sioux prophecy that a terrible black snake will bring harm to their people.

The march made an extended stop at the Trump International Hotel in Washington. Protesters erected a tepee in front of the hotel, played drums, and chanted. As of noon local time, there was no reported violence, and the protesters planned to end the march at the White House.

In front of the Trump hotel with a message: don't mess with Native Nations. #NativeNationsRise #NoDAPL pic.twitter.com/HFL3xsBfTZ

While the protests might show that the spirit of the protest has not broken, the Standing Rock Sioux’s legal objections have not been successful. On Tuesday, a federal judge rejected a request by the Cheyenne River Indian tribe to halt the pipeline’s construction on religious grounds. According to The Los Angeles Times, oil could begin flowing through the pipeline as early as next week. Lawyers representing the tribe said they would continue to challenge the pipeline in court.