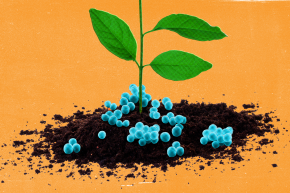 Ag Companies Are Looking To Feed The World With Microbes

Farmers looking to grow more, better crops with fewer fertilizers and pesticides may soon find a new tool in their arsenal: microbes.

In the past, microbes have worked in tandem with synthetic agriculture products. Now companies and microbiologists are creating products that rely more heavily on microbes to replace synthetic ones—industry experts estimate that the market could grow to $5 billion by 2021.

Plants, like humans, have co-evolved over millions of years with their microbiomes, the constellation of bacteria and other microbes that live in their roots and other structures. Even more than us, plants are depend on their microbes to, say, ward off damaging insects or parasites or withstand dry or salty conditions.

“Plants have fewer ways of dealing with stress,” said David Perry, the president and CEO of Indigo, a two-year-old startup focused on creating microbial products for agriculture. “If it’s too hot, they can’t get up and walk into the shade, or go down to where there’s water. they have to deal with the environment they’re in,” he said.

More Tiny Worms Could Hold The Secret To A Better Sunscreen

Microbial products aren’t new in agriculture; over the past 50 years or so, researchers have created products called agricultural biologicals that combine synthetic products with bacteria or fungi. Big companies, such as Bayer and Monsanto, have a number of biologicals already on the market and are spending millions of dollars per year to discover new helpful microbes, according to Marcus Meadows-Smith, the CEO of BioConsortia, another small company specializing in microbial agricultural products.

But some smaller companies, such as Indigo, Bioconsortia, and New Leaf Symbiotics, are pushing to shift away from the use of synthetic products altogether, augmenting plant growth with microbes alone. This often comes in the form of a seed coating—the microbes present when the seed germinates determine which will make up the plant’s internal microbiome. With microbial coatings that help plants ward off threats, they hope to eventually cut down on fertilizers, pesticides, and create crops that are more adaptable to climate changes.

Companies that discover a helpful microbe can patent its use in agriculture and create products to sell to organic or sustainably-focused farmers. This is giving small agriculture startups an unusual opportunity to compete with Big Ag—the six companies (Bayer, Dupont, Monsanto, Dow Chemical, Syngenta, and BASF) that together sell the vast majority of seeds and pesticides to non-organic farmers all over the world. Indigo, for example, already has two microbial products out, for cotton and wheat, and plans to launch products for corn, soy, and rice this year.

Meadows-Smith, of Bioconsortia, compares the dynamic to Silicon Valley startups getting acquired by Facebook of Google. “When you’re looking at innovation, oftentimes you’ll find that small groups of scientists funded by venture capitalists or private equity can move more nimbly in a way that they can make breakthrough discoveries that are extremely useful to growers,” he said.

But moving these new products forward can be a hard sell for farmers, without the help of a larger company. Indigo is marketing to farmers directly, skipping the sector agricultural salespeople that usually help farmers buy everything seeds, fertilizers and everything else. Perry is also tweaking Indigo’s business model to “share in risk and reward” with farmers, so that farmers avoid paying for products up front. Depending on the claims they make, Indigo’s products still have to be vetted for safety by the Environmental Protection Agency (EPA) or the U.S. Department of Agriculture (USDA).

Either way, microbial products won’t change agriculture overnight. Perry estimates that it might take another 10 to 20 years before purely microbial products make up a bigger proportion of the market. It might happen faster through partnerships with larger companies.