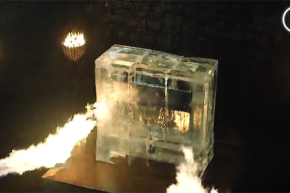 Well, slowly melting ice is one way to get breathless fans hyped

“Game of Thrones” fans will do almost anything to find out what’s next in the crazy fantasy world George R. R. Martin created, including watching a giant block of ice slowly melt on Facebook Live for nearly an hour.

The “Game of Thrones” Facebook page revealed that HBO’s fantasy drama is coming back on July 16 by live-streaming two flamethrowers trying to melt a giant block of ice. People watching had to type in “Fire” or “Dracarys” in the comments to speed up the rate at which the flamethrowers would shoot. Once the ice melted, the live-stream began to show a teaser trailer featuring the house mascots and several voiceovers from the characters. The premiere date then appeared at the very end. The production team seemed to have had connectivity issues because it took three live-streams to show the ice melt.

It might’ve only taken 45 minutes to find out when Season 7 is premiering, but it’ll take four months until fans can start obsessing over the show once again. It’s still unclear what fans can expect for Season 7 other than the Fire vs Ice theme, but you can expect to see more of Dany and her dragons, the Lannisters and few remaining Starks.