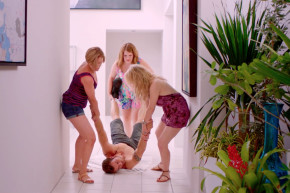 The plot of the newly-announced comedy “Rough Night” apparently centers around a bachelorette party’s accidental killing of a male stripper and the hijinx that ensue as the women work to cover it up while still trying to have “the best weekend of our fucking lives.” While the film’s marketing materials call it “hilariously dark,” critics on social media immediately shot back that the film—which stars top actresses including Scarlett Johansson, Kate McKinnon, and Ilana Glazer—makes light of a very serious issue.

For sex workers and their allies, who viewed the trailer when it was released on Wednesday, the plot line was no laughing matter. Many took to Twitter and Tumblr to call out what they saw as a punchline that was insensitive and potentially harmful (though they note that not all exotic dancers/strippers consider themselves sex workers.)

Wow, the day after #IWD2017 and @marieclaire think it's utterly HILARIOUS to laugh about killing sex workers https://t.co/OPVx3x84za

Violence against sex workers is a real and prevalent threat. Creating a movie about it under the guise of comedy with (surprise!) no real

Some called for a boycott.

In other news, I'm boycotting @RoughNightMovie bc it normalizes violence against sexworkers and hahaha, aren't dead hooker jokes fun. Not.

As many pointed out, violence against sex workers is a major issue. It is estimated that 45 to 75 percent of people working in this field experience sexual violence in particular. Another study found that workplace homicides occur at a higher rate among sex workers (though it’s worth noting that the sex workers represented in that study were all women).

In the movie, Jillian Bell’s character executes a running leap onto the stripper’s lap and accidentally kills him. This may not be a classic example of sexual violence, but critics on social media said the joke detracts from the real safety issues sex workers face.

The ongoing central joke— the group of mostly white friends going to great lengths to hide the death, shuttling the body around “Weekend At Bernie’s”-style—also struck some as especially insensitive to issues of race and class. While “Rough Night” centers around women, who remain underrepresented in the film industry, it’s women of privilege who get to serve as the protagonists at the expense of those in the sex industry, they wrote.

“Given sex workers’ extreme vulnerability to violence, the trope of a dead sex worker as a plot device is wildly inappropriate,” Katherine Koster, communications firector for the Sex Workers Outreach Project, told Vocativ in an e-mail. The gender twist in the film, she said, doesn’t change the fact that it perpetuates “viewing sex workers as objects and sex worker lives as disposable.”

The production companies behind the film, Paulilu and Sony Pictures Entertainment, had not responded to Vocativ’s inquires regarding the controversy as of press time.