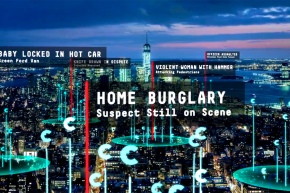 The new app, called Citizen, sends alerts of nearby crime you could go record—or avoid

The advent of livestream video has made it easier for people to broadcast different forms of injustice, whether it’s someone being a victim of a hate crime or a cop abusing the law. Now a controversial app aims to inform people of police calls happening near them, so they can go film and potentially livestream the action.

“Citizen,” an app by Sp0n Inc., launched this week as a service that, by monitoring 911 calls, alerts New Yorkers of nearby crimes and emergencies as they happen. The goal is to allow people to capture video of the incidents, assist in an investigation, or monitor police abuse. But if the concept of “Citizen” sounds familiar, it’s because it’s Sp0n’s second attempt at the concept.

The company’s original app was first launched late October 2016 as “Vigilante,” but it was banned from the App Store after just one week because it encouraged people to intervene in crimes, which violated Apple’s policy on safety: “If your app behaves in a way that risks physical harm, we may reject it.” The name itself gave off the wrong impression, the founders claimed, but the app’s Terms of Use and promotional blog post also seemed to promote vigilantism.

Now, Sp0n is using different language for Citizen that it says complies with Apple’s App Store requirements and doesn’t urge users to put themselves in risk or go harm others.

“The name is now Citizen. This more accurately communicates our mission, and we have entirely rebranded the app,” the company wrote in a Medium post. “We built this app to create safety; any reckless or dangerous behavior will not be tolerated. Our in-app messages now more strongly communicate this, and the terms of service have also been updated to reflect this policy.”

“Citizen” works by having a staff that monitors police and fire scanner frequencies and maps dispatches with short descriptions, so users within the vicinity can run to the scene and start broadcasting. The company says it protects the privacy and information in all 911 calls, including that of callers and first responders.

The app can also be used to avoid crime scenes, rather than to go investigate. For example, if a person were to be driving to a shopping mall in which there’s a hostage situation, the app would alert them and they could just turn around and avoid being in danger.

The New York Police Department didn’t support the app when it first launched as “Vigilante” saying that “crimes in progress should be handled by the NYPD and not a vigilante with a cell phone,” according to an email received by the Washington Post. The NYPD has yet to comment publicly on the rebranded app and its new mission.

“Citizen” is currently available in all five boroughs of New York City.