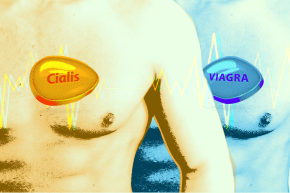 Drugs like Viagra and Cialis really don’t need any more publicity — the manufacturers of America’s two most prescribed male enhancement pills spend nearly a half billion dollars on advertising every year. So there’s a decent chance you will be hearing this news straight from the companies themselves one day: New research suggests those erectile dysfunction drugs and others like them are linked with healthier recoveries after a heart attack, including a significantly reduced risk of heart failure or death.

Swedish researchers are presenting their findings this week at the annual meeting of the American College of Cardiology. They tracked the first three or so years after 43,000 Swedish men suffered their first heart attack. About 3,000 of them were also taking an ED drug, and this group proved 33 percent less likely to die during those three years than the other 40,000 men. They were also 40 percent less likely to find themselves hospitalized for heart failure.

A backward-looking study like this can’t prove whether drugs like Viagra or Cialis actually cause this decreased risk of death. It’s very possible that those receiving these prescriptions are just on average healthier in general — after all, simply being interested in and otherwise capable of having sex after a heart attack suggests a generally healthier lifestyle, particularly for men in their 60s and 70s. There’s also plenty of noise in the data: There’s no way to know how many of the 40,000 men had similarly active sex lives without need for male enhancement, or how other factors might skew the results of the study.

Still, there’s at least a little reason to think these medications really could have some effect on heart health. The researchers, who received funding from the Stockholm County Council and the Swedish Heart and Lung Foundation, point out that one specific type of ED drugs known as PDE5 inhibitors — Viagra, Cialis, and Levitra all fit in this category — was linked to that increased chance of survival. Another type known as alprostadil, sold as Muse in the United States, had no such effect.

That suggests it’s more than just the simple fact of taking male enhancement. Indeed, PDE5 inhibitors were originally used to treat chest pain caused by constricted arteries, and other studies have linked this drug type with decreasing blood pressure in part of the heart, which would reduce the overall strain for those recovering from a heart attack. It’s too soon to know for sure what’s going on here, but then it’s a reasonable guess the makers of Viagra and Cialis are going to want to find out and tell everyone as soon as possible.