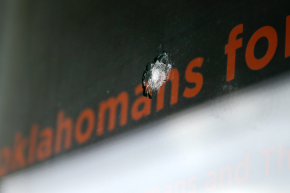 The Equality Center in Tulsa was vandalized with a pellet gun this week — Jessie Wardarski/Tulsa World
By Ryan Beckler
Mar 10, 2017 at 12:39 PM ET

A wave of attacks against LGBT community centers — spanning coast-to-coast — cropped up in the first months of 2017, receiving little national media coverage and no words of condemnation from the president.

Since President Donald Trump withdrew federal protections for transgender students in late February, three LGBT centers have been vandalized, bringing the total to at least five in the past month. But hate crimes against LGBT people have been on the rise since November’s election, according to Heidi Beirich, the Intelligence Project Director at the Southern Poverty Law Center (SPLC).

“The truth is there’s been a lot of groups of people victimized since the election [in November], especially the LGBT community,” Beirich said, noting that LGBT people continue to be the group most likely to be targeted for hate crimes in the United States.

Most recently, at least one person riddled the Equality Center in Tulsa, Oklahoma, with a pellet gun. Hours later, an enraged man came into the same building, cursed out the front desk crew, and allegedly told staff, “I wish you would all die.”

“The [shooting incident] made us mad and concerned, but that scared us to death,” Toby Jenkins, the center’s executive director told the Tulsa World on Monday. “They can’t hold in their bigot, and it just explodes on us like a volcano.”

On the East coast, two men were seen on surveillance footage shattering the glass door of the Garden State Equality office in Asbury Park, New Jersey. And just a day after Trump announced his new transgender policy, vandals shattered a window of the Equality Florida office in Orlando.

Earlier in February, Milwaukee’s Diverse & Resilient Center was reportedly vandalized for the third time in two months, with “F*g” being graffitied in the most recent incident.

“We can’t be certain of the motives behind the vandalism or if the incidents are related, but we are aware that such attacks have increased across the country since the election,” Gerald Coon, the president of Diverse & Resilient, told NBC News. “We remain undeterred and will continue our work.”

Out West, an Los Angeles LGBT center was spray painted with the words “F**k Trannies”.

“We see the same pattern,” SPLC’s Heidi Beirich said. “Trump will attack a group of people and then we see incidents of hate crimes afterward.”

The recent rise in attacks against the LGBT community come alongside an even sharper rise in threats to Jewish Community Centers. Those incidents were finally, explicitly condemned by President Trump in late February — after many criticized his weeks-long silence.

Also in late February, the president backtracked on his promise to fight for transgender people, by rolling back an Obama administration rule to allow students to use the bathroom that corresponds with their gender identity. A report in December found that a majority of trans people in America were already avoiding public restrooms.

The White House did not return a request for comment.