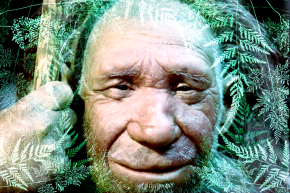 Neanderthals Used Plants Like They Were Aspirin And Penicillin

More than forty millennia before Alexander Fleming’s discovery of penicillin, Neanderthals may have had a surprisingly sophisticated grasp of how plants could cure what ailed them. Looking at ancient dental plaque from our hominid relatives reveals that they had figured out what plants would work as painkillers and even what moldy fungi would work as antibiotics.

It’s only relatively recently that humanity has developed a full-fledged knowledge of the underlying biology behind much of medical science, but a basic understanding of plants’ medicinal properties goes back millennia. Ancient Greeks, Egyptians, and Indians all used mold to treat infections in the same basic way more refined antibiotics do today, and this new research on Neanderthal plaque in what is now Spain and Belgium reveals the same basic grasp of healing.

Researchers at Australia’s University of Adelaide examined the dental plaque from five Neanderthals from about 42,000 to 50,000 years ago — these are the oldest samples ever so tested. The remains of microorganisms stuck in between these ancient teeth can reveal plenty about the diet and health of these hominids. There were some intriguing differences between the individuals: For instance, the Belgian Neanderthals dined on rhinoceros and sheep with the occasional side of wild mushrooms, whereas the Spanish Neanderthals favored a mostly vegetarian diet.

But the mouth of one Neanderthal was the most revealing. Unlike the others, this individual was in a bad way, with the plaque revealing he or she carried a gut parasite that would have caused nasty diarrhea. The researchers determined that this individual — and only this one among the five, suggesting this wasn’t a common thing — was chewing on poplar leaves, which contains the key ingredient in aspirin. The Neanderthal’s plaque also revealed evidence of the mold penicillium, the original source fungi for penicillin.

While it’s possible that similarly ancient Homo sapiens had the same knowledge, archaeological work hasn’t yet turned up evidence of that. Either way, this particular research is a good reminder that Neanderthals weren’t the primitive dullards they are often imagined as. They might not have had any deep understanding of how or why these plants could be helpful, but they knew more than enough about the world to know what to chomp on when desperately ill.