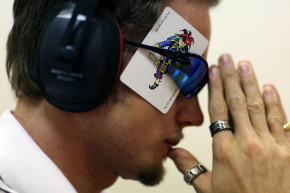 Elite memory athletes aren't born that way. They strengthen their memory through training, and you can too

Boris Konrad is a world-class memory athlete. In competitions, he has memorized 119 random words in five minutes, remembered 2,865 digits of a binary string in a half-hour, and recalled the order of 18 packs of cards after just 60 minutes. Such feats might sound incomprehensible, beyond the ability of all but those with naturally incredible memories like him. But Konrad, in his day job as a neuroscientist, has just helped work on a study that shows the opposite: Just about everyone has the potential in their brains to uncork such feats of memorization.

That’s not to take anything away from the accomplishments of Konrad and other elite memory athletes — they put in the work to sharpen their memories to such a dizzying degree, to say nothing of handling the pressure of competition. Still, as Konrad and his fellow researchers found during an MRI study of 23 elite memory athletes and 23 people with average memory abilities, there’s no particular difference in brain anatomy between the two groups. That suggests super memory isn’t a question of natural aptitude — which the researchers say makes sense, given memory athletes report forgetting their keys and experiencing other everyday memory slip-ups.

What these competitors have instead done is train their minds so that different parts of the brain are more powerfully connected to one another — in particular, one involved in linking new information with established knowledge and another that deals with strategic learning. And while competitors have different training strategies, the most popular is one known as the mind palace or method of loci.

The technique relies on picturing a real place with which the person is highly familiar, then “placing” the items to be remembered at different spots in that location. The person then retraces her imagined steps through the mind palace and recalls the seemingly random list of objects in the right order. Greek and Roman orators used this method, as do competitors like Konrad to memorize hundreds or even thousands of items.

And the study suggests it really can work for anyone. A follow-up experiment had 51 participants try to learn a list of 72 words. A third of the group then received training in this method, while another third worked on short-term memory and another had no training at all. Afterward, the short-term and untrained groups increased their total recall by only 11 and seven words, whereas the mind palace group recalled an average of 35 more words. Even four months later, that one lesson still helped, with them remembering an average of 22 more words.

Most of us are never going to do what Boris Konrad can do. But if he and his colleagues are right, that’s more to do with the average person’s willingness to put in the years of hard work to reach such lofty heights of memorization than anything to do with inherent ability.