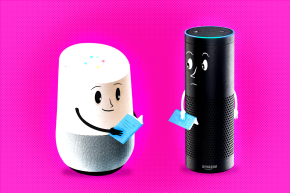 Alexa, Is Google’s AI Assistant Smarter Than You?
By Alejandro Alba

Alexa, Is Google’s AI Assistant Smarter Than You?

Amazon and Google smart devices take a 5,000-question IQ quiz, and one came out on top

If you’re still on the fence about which smart speaker to buy, the Amazon Echo or the Google Home, knowing which one is more “knowledgeable” might help you decide.

Stone Temple, a digital marketing agency, published a new study Wednesday revealing that Google’s Assistant knows more than Amazon’s Alexa. Stone Temple was able to conclude this by asking Google Home and Amazon’s Echo 5,000 questions each to see “which device was smarter.” Turns out Google Home is the superior artificial intelligence.

The specific list of questions was not released, but some examples would be “how fast does a jaguar go?” or “how old is George Washington?” Google Home was able to answer more than three times the questions the Amazon Echo was able to answer — and correctly — which makes sense given Google’s search index has been around since the early 2000s.

“All in all, for this particular test, Google Home won handily,” Eric Enge, founder and CEO of Stone Temple, wrote in a blog post. “There are several other important categories for which the devices can be analyzed and compared that weren’t included in this test.”

Google Home might have proved itself worthy of being placed on your shelf with its big memory and knowledge power, but just like Enge said, that doesn’t necessarily mean it’s the best smart speaker with a voice assistant in the market.

When it comes to home entertainment, personal assistance and smart home controls, the Amazon Echo might be the best option. Amazon’s Echo has been very successful over the past year with adding 7,000 skills — the integrations it has with other devices and services — which are capable of ordering things from the Internet using Alexa including food, house cleaning supplies and even Uber rides.